So you've just been dumped in a foreign city you know very little about and you're feeling lost and confused? There's an app for that! No really, there is. It's called the Lonely Planet Istanbul City Guide and it was a lifesaver. We used the hotel internet to download it onto Clark's phone and off we went. 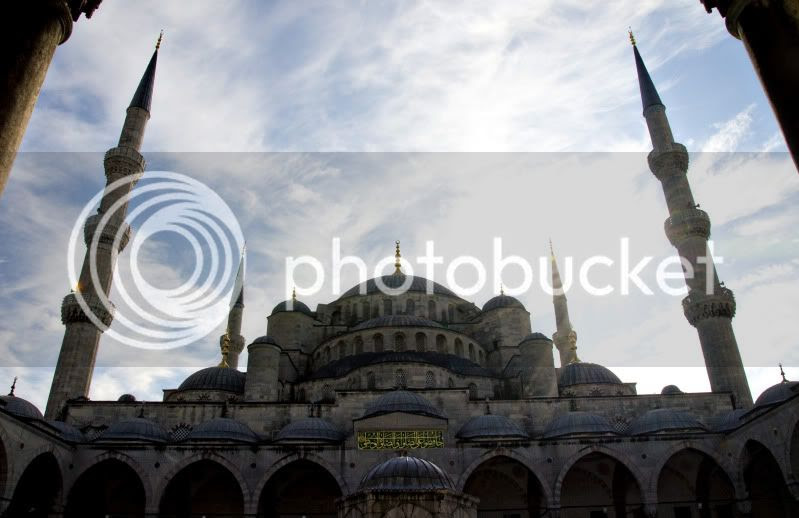 We wanted to start at the Hagia Sophia but when we showed up there several guys directed us towards the Blue Mosque (just across the way), telling us it would be closing for prayer soon so we better hurry. Foolish tourists that we are, we decided to listen to them. They must have been an outfit of carpet sellers who work together, because once we arrived at the Blue Mosque we were immediately met by Yunus the Carpet Seller. Yunus, our own personal (and unwanted) tour guide. This was just the first of many scams we fell victim to while in Istanbul, including the shoe shine* scam which we learned about later while reading up on Wikitravel.
*From Wikitravel: "Some people will walk around Taksim with a shoeshine kit, and the brush will fall off. This is a scam to cause some Western tourist with a conscience to pick it up and return it to the owner, who will then express gratitude and offer to shine your shoes for free. While doing that, he will talk about how he is from another city and how he has a sick child. At the end, the shiner will demand a much higher price for the "free" services provided than is the actual market norm. If you actively decide that you would like your shoes shined, then expect to pay not more than 5 lira for both." We only paid the guy 2 Lira and vowed to never pick up anything that anyone "happens" to drop in Istanbul again. I wanted to kick him in the balls, but we happened to be in a dark, empty alley and the boys were with us. On the plus side, Clark's sneakers have never looked shinier.
Anyways, back to the Blue Mosque also known as the Sultan Ahmed Mosque, built between 1609 and 1616 by, you guessed it, Sultan Ahmed. 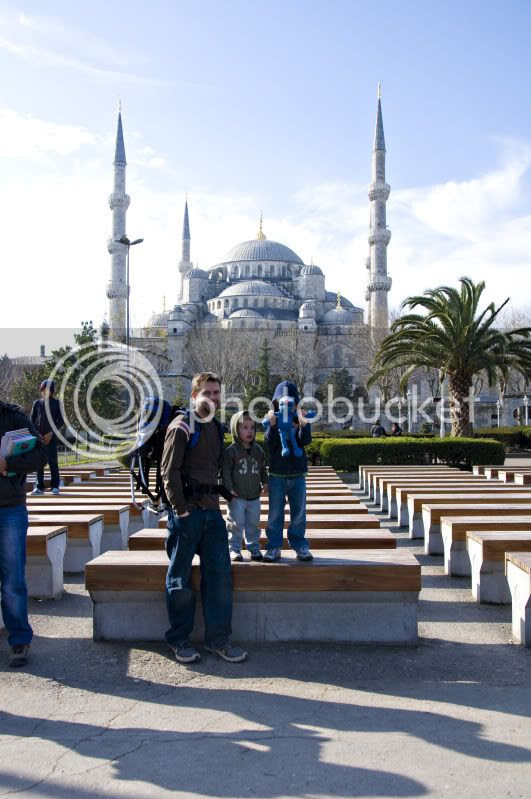 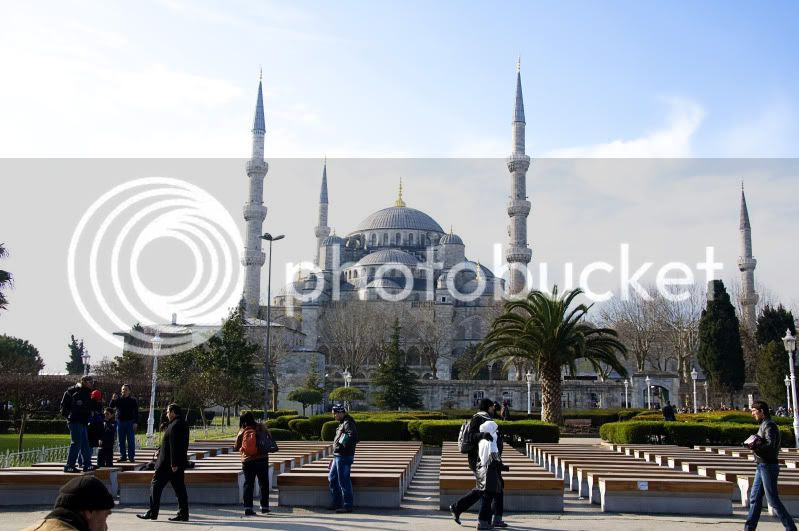 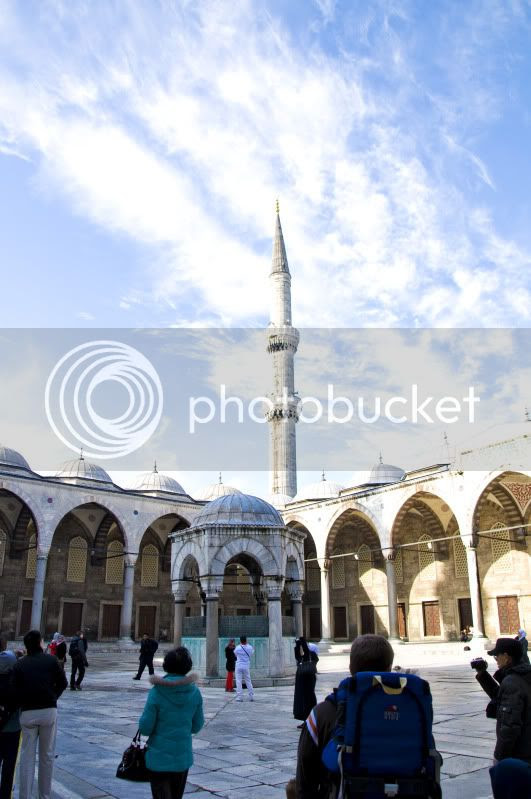 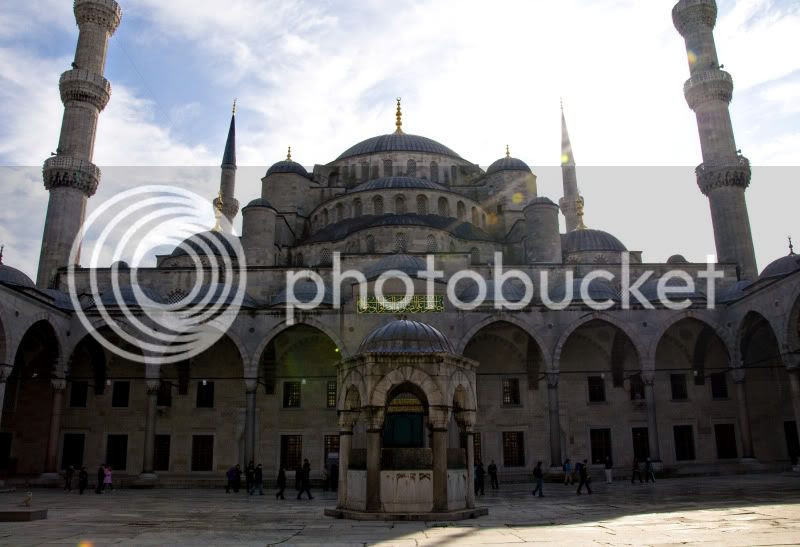 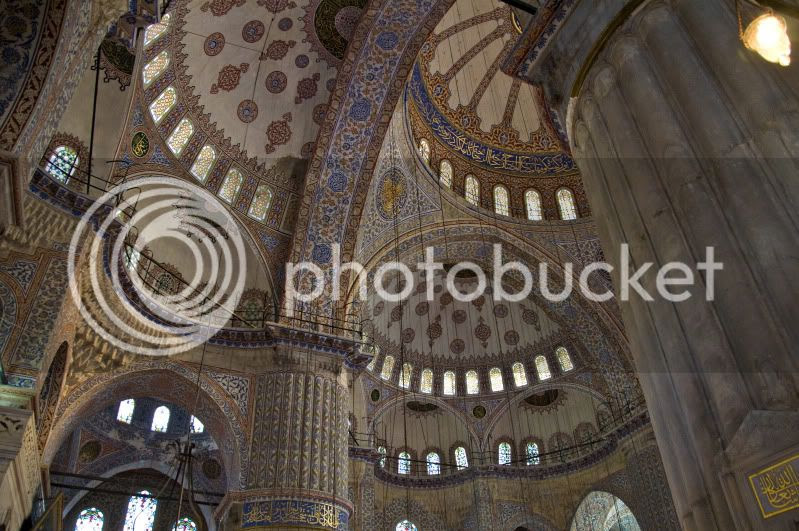 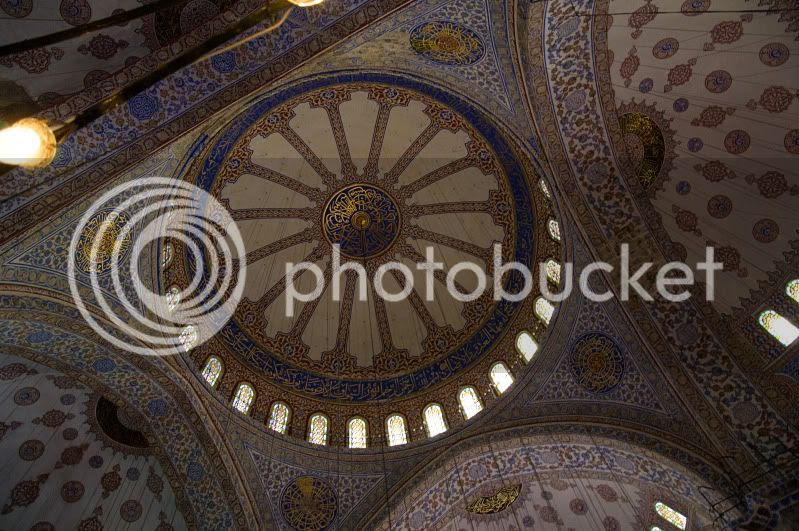 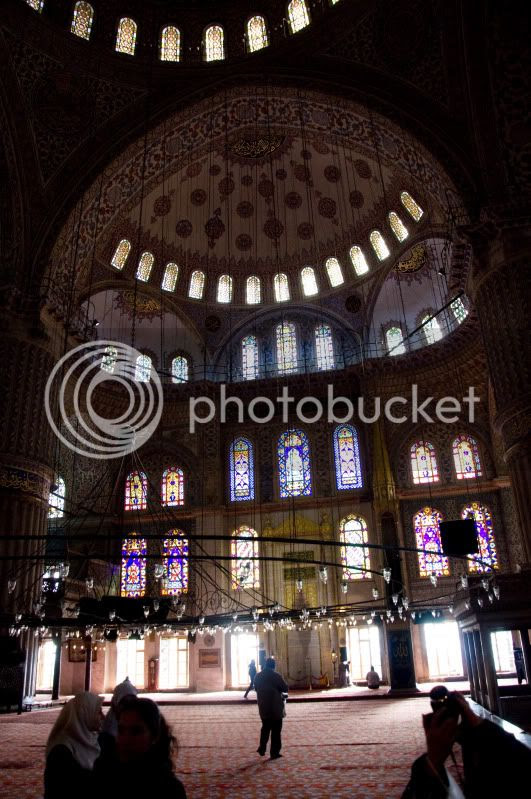 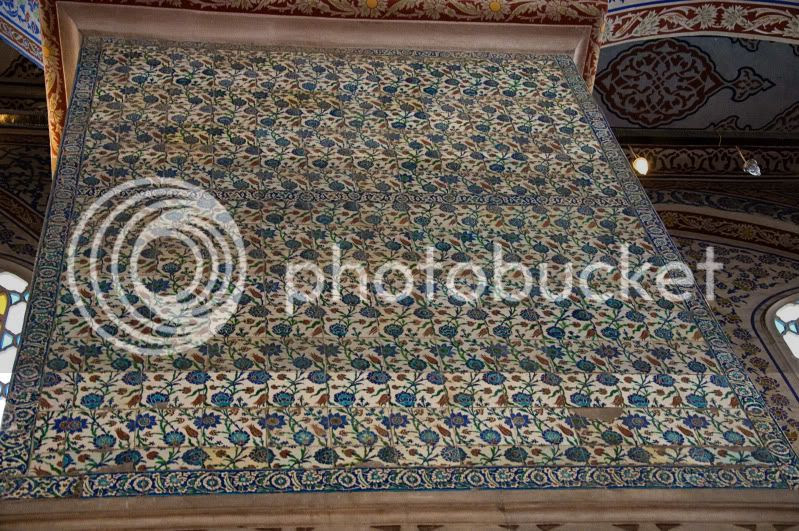 Hi, my name is Margaret and I'm a tile-aholic. 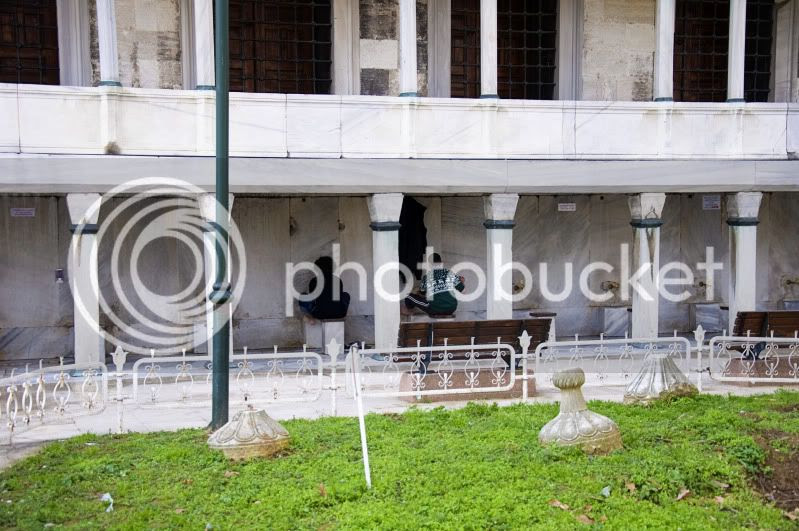 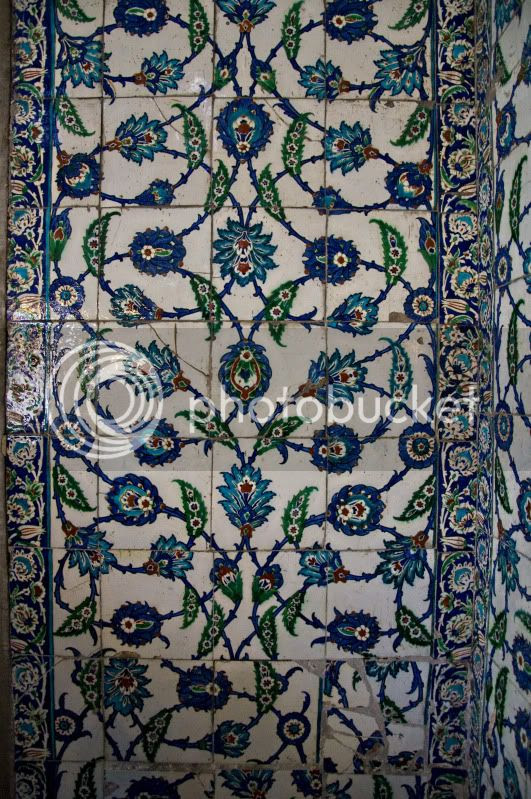 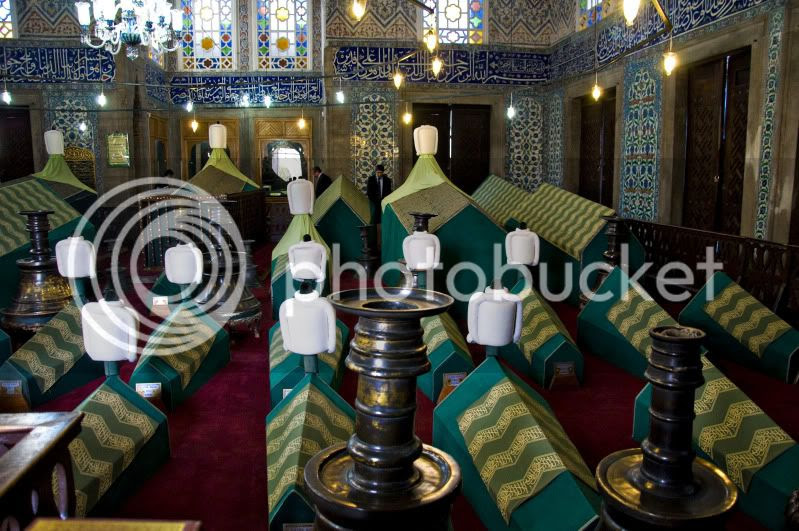 Sultan Ahmed's mausoleum, with his tomb and those of his wives, sons and daughters. 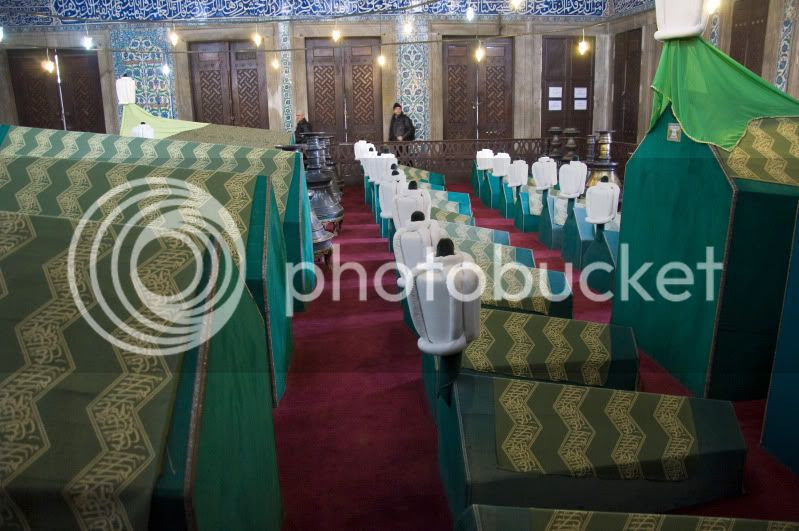 I liked all the turbans. 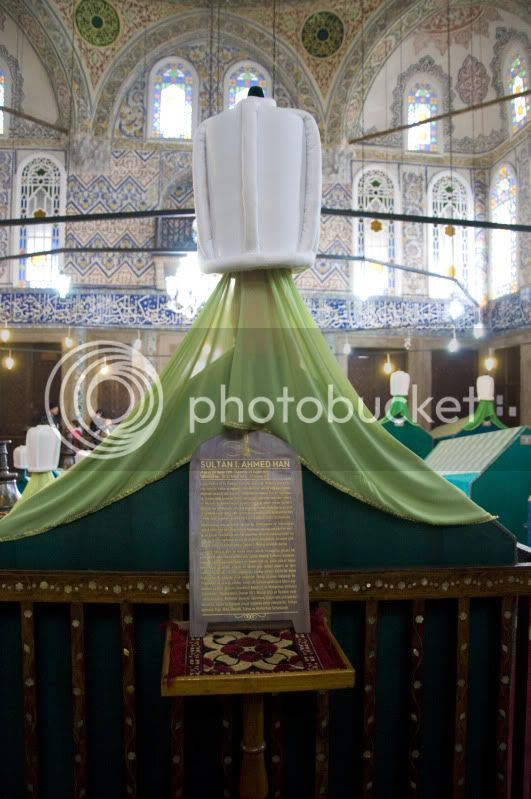 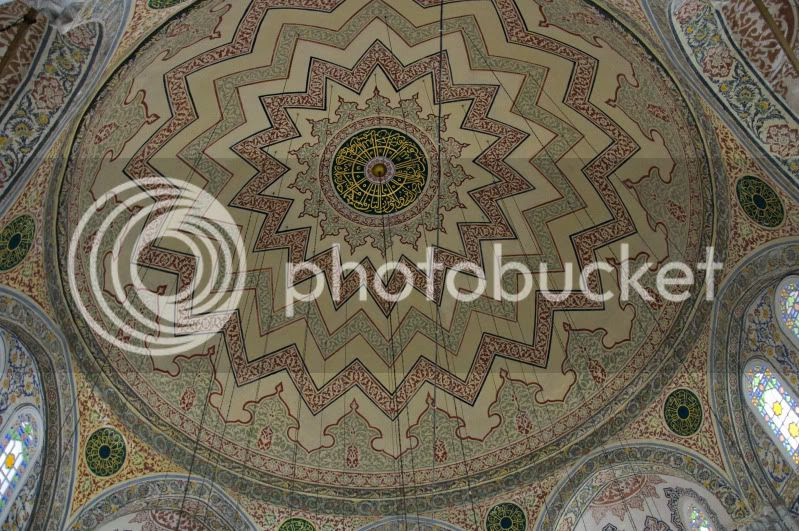 Although Yunus offered us a nice tour, Clark insisted that we experience the Hagia Sophia on our own. So we thanked him and explained that we didn't need his services anymore. He looked pretty crushed when we told him that we would not be visiting his carpet shop. He must not have gotten the message because he was still waiting for us outside of the Hagia Sophia. Booker saved the day by throwing a massive tantrum and we hurried off in another direction. Sorry, but when you're touring with a 4 year old and a 2 year old there's no time for browsing carpets that you don't plan on buying.
Despite the unwanted company, the Blue Mosque was pretty spectacular. It was built to rival the Hagia Sophia (they literally face each other) and it certainly comes close. I love me a good mosque, especially one with lots of intricate tile work but the whole time I was anticipating our next stop...
Posted by Margaret Proffitt at 10:05 AM

I'm singing that song from Sesame Street now—there's an app for that! :)

But seriously, it's good to know there's an app for that.

And I'm glad that Clark was with you! I didn't know you were expecting! This one time I went to Greece, pregnant, with a toddler, and no husband. It was fun but the fun-factor would have been larger if my husband had been there to carry the bags/child! :)

Hi..I have a question on the carpet seller.