Clark says I've been reluctant to "blog the dog" because I don't like him. Yes, we got a puppy and yes, I have been a little reluctant to tell the world for a couple of reasons. First, remember Buckley? Yeah, neither do I. It's sad but he was a little too high energy for our family and when we moved to Tucson we didn't bring him with us. I thought my dogs days were done but then I think about Brody- you know, Brody? Brody who always lingered in the background of our videos, who was the chillest dog around, who was easy and sweet and who may have turned me into a secret dog-lover. Well, when I think about him, I wish we had a dog. And really, I wish my boys had a dog to grow up with.
Well, Clark finally wore me down. I told him I wanted a dog on the verge of death (more relaxed that way) but he brought this guy home instead... 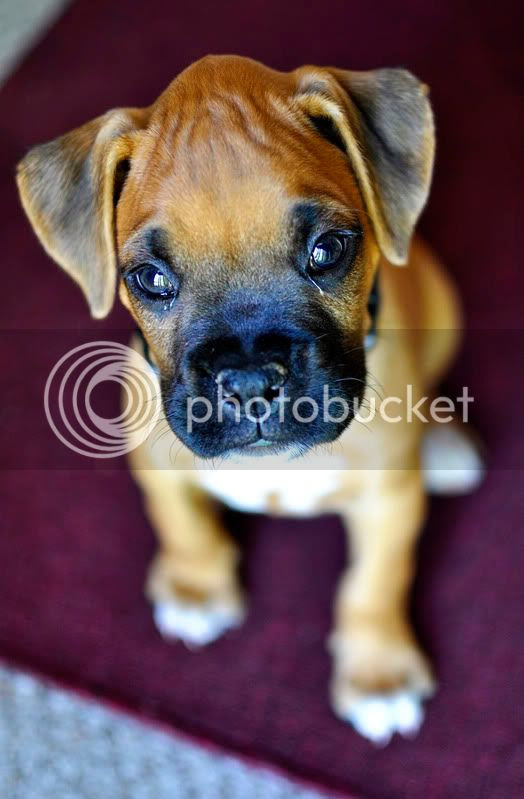 He's a male boxer, fawn, born on the fourth of July. Booker named him Fergus because "like Callie's has, mom" (his aunt Callie has a chihuahua named Fergie that he loves) and also after one of his favorite books. The boys LOVE him, Clark loves him and I'll admit that he's pretty dang cute. Also, he earned points with me by curling up at my feet and cuddling with me during the entire Miss Universe pageant. Too bad Brody is not around to teach him a thing or two.
Posted by Margaret Proffitt at 1:31 PM 7 comments: 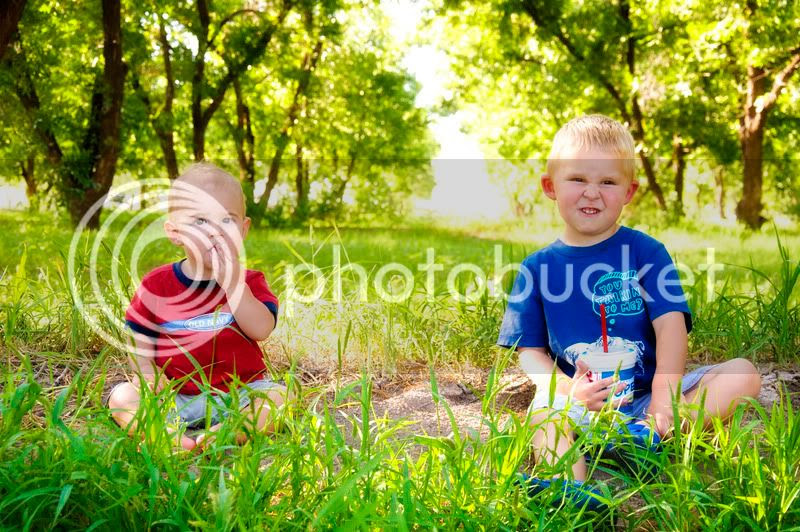 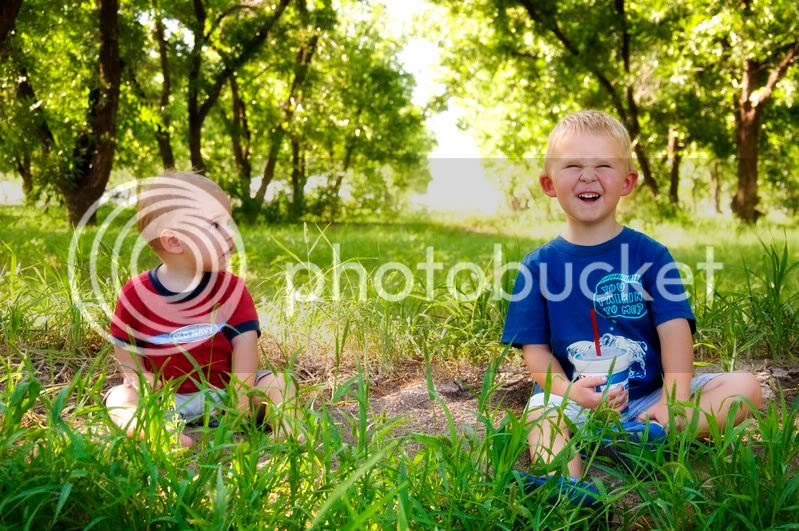 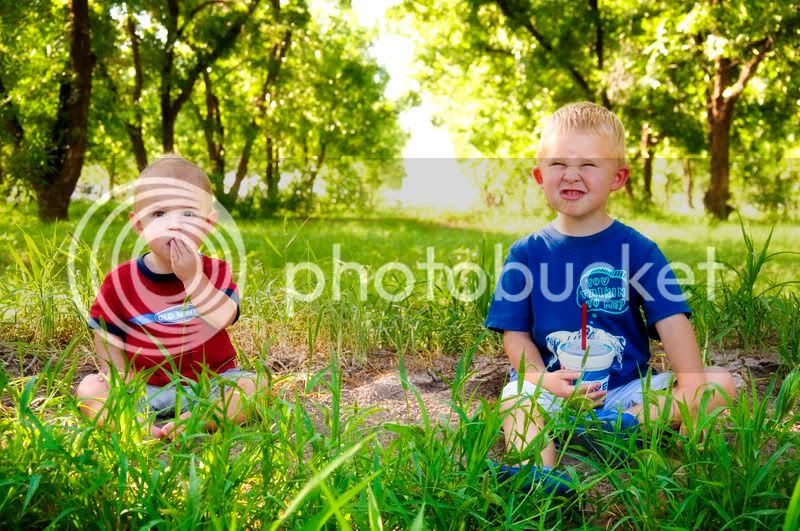 M: Teichert Blaine, do not put things in your mouth! NOW SMILE! 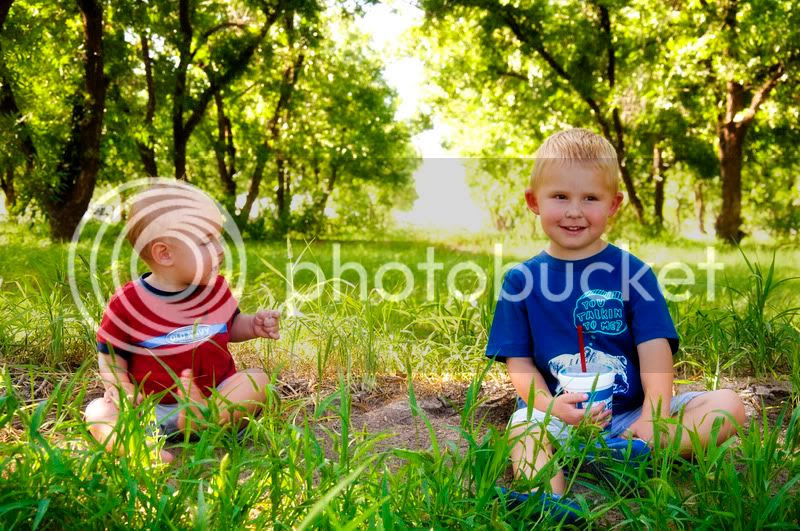 M: Close enough.
Posted by Margaret Proffitt at 9:10 AM 5 comments:

I think this was my 5th (or maybe 6th) annual beach trip with the Proffitts. Though Clark's family has been coming for years and years. How my in-laws managed to take 11 kids camping for a week every year, is beyond me. But I'm sure glad they started such a fun tradition. This year we had 14 adults and 30 kids (or so I've heard). Each year, we stay at the KOA in various motor homes, tent trailers and tents in sites right next to each other. I wish I had taken more pictures at the campground because I love spending time at the KOA almost as much as sitting on the beach. We eat our meals together, sit around a campfire together and let our kids run wild together. It's heaven. 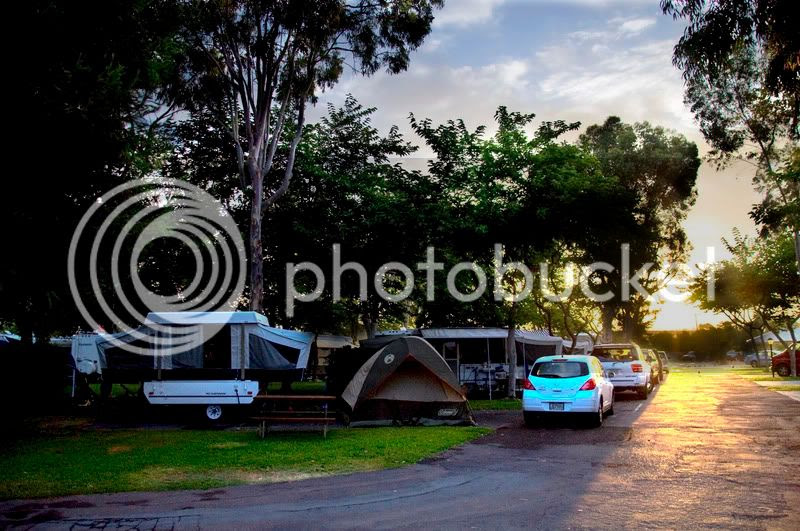 Here you see our sites... at 6 in the morning. Yes, my boys didn't want to miss anything so they decided that waking up at the crack of dawn all week would be a great idea. 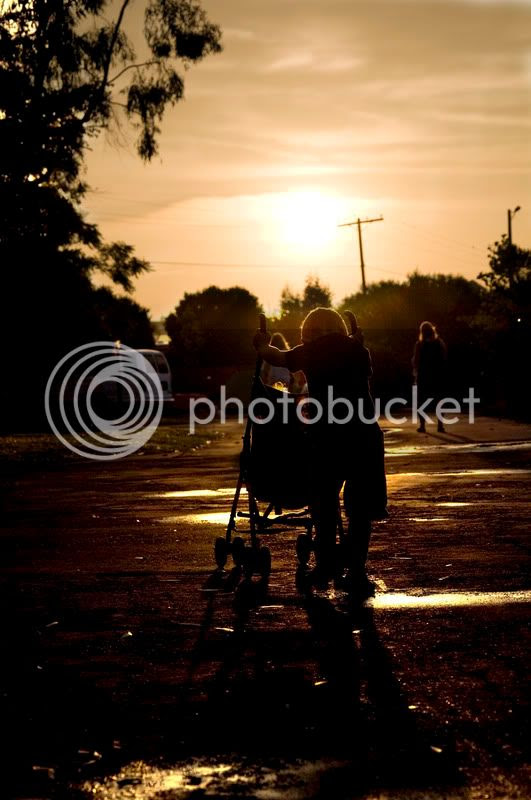 So we took lots of early morning walks. And I made Booker push the stroller the whole way because I was too darn tired. That lady in the background probably thinks I'm cruel. At least I got to see some awesome sunrises. 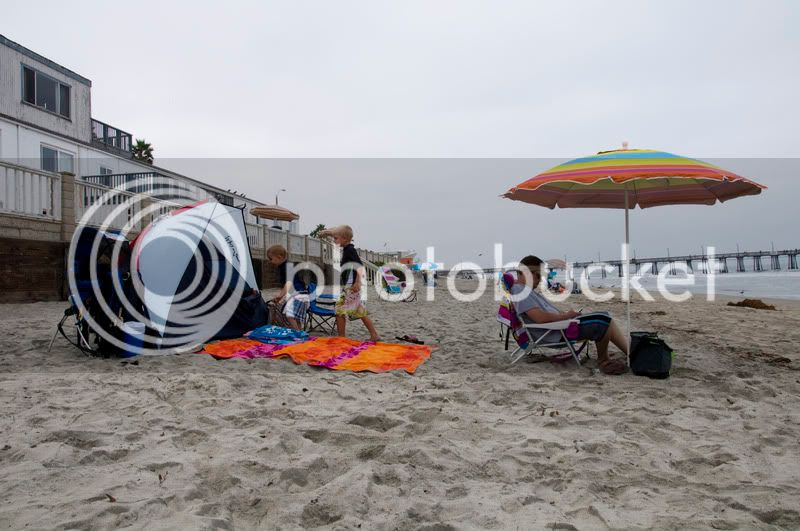 Each morning, we wake up, make lunches and head to the beach. Because our family is one of the smallest (and because we had already been awake for HOURS), Clark and I were usually the first at the beach- which meant we had the responsibility of securing prime beach real estate for everyone else. We had to tell a nice Eastern European family to quit encroaching on our territory which made me feel awful. 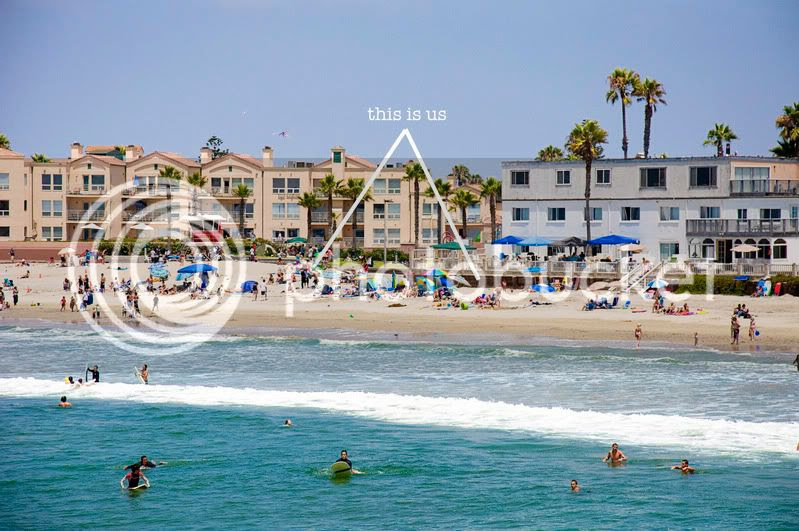 But it was necessary- see, we take up a TON of room. And this year, the beach seemed to be more crowded than usual. Luckily, we only lost one child the entire week (is that right?). Of course, it was mine. Booker wasn't even lost that long and thankfully, he's the type of kid to sit down with a sad look on his face and wait for someone to find him. I feel much worse about losing Greg's flipper than I do about losing Booker. I'm so sorry about your flipper, Greg! 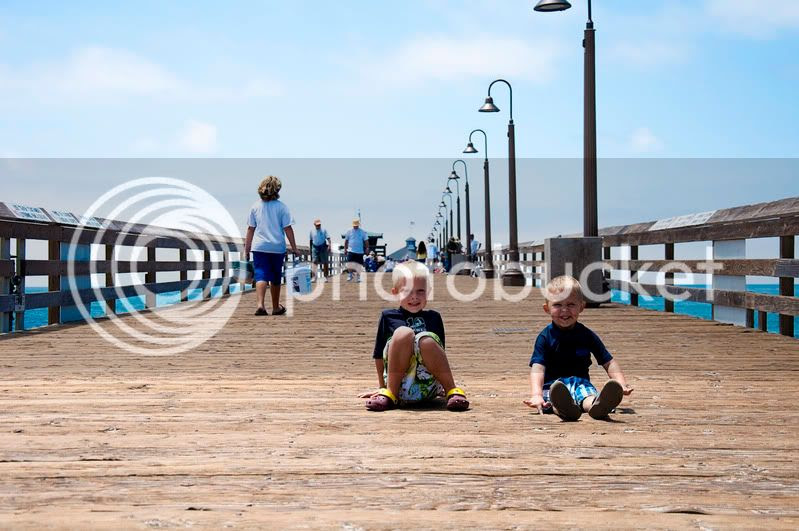 We took lots of walks on the pier where the sights AND the smells were intriguing- think homeless people fishing for their lunches... 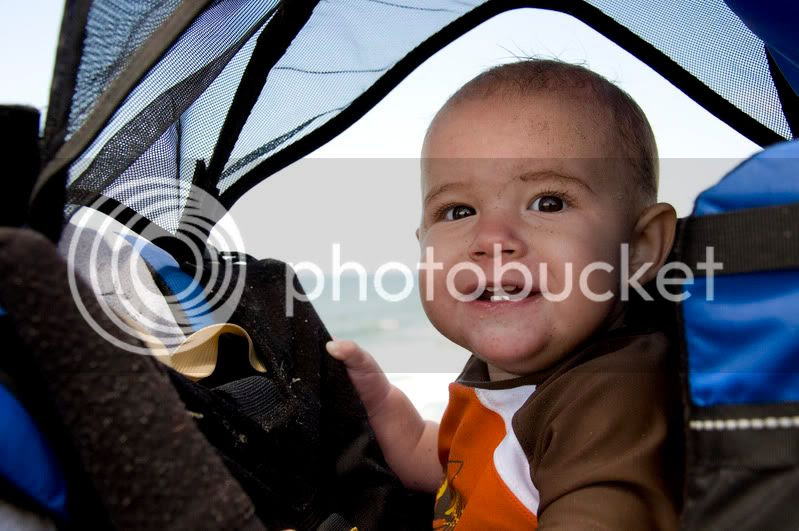 And lots of trips to the ice cream store. Teichert loved being carted around in his backpack, complete with sunshade. He wasn't as thrilled to take a nap each day. This tent-within-a-tent setup made sure he couldn't escape, but it also made for a very hot nap. 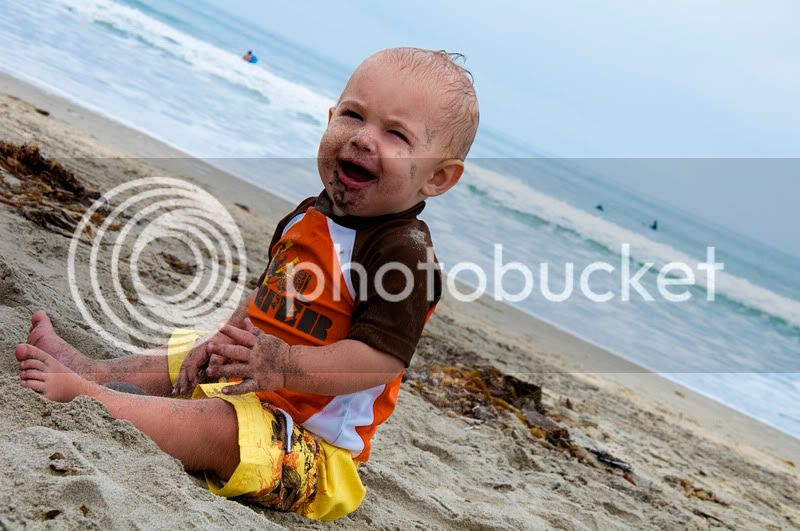 This kid ate sand by the fistful. 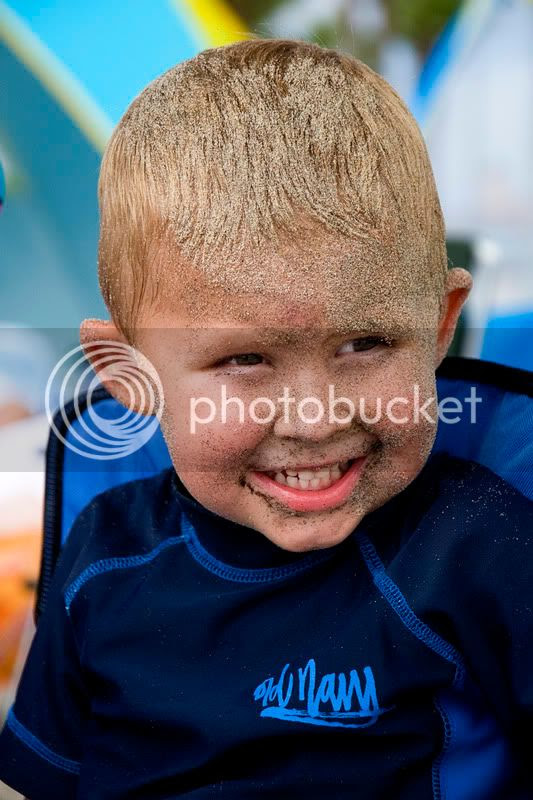 This guy didn't eat sand but he fell down...a lot. So he was constantly covered in sand, which made reapplying sunscreen somewhat difficult. 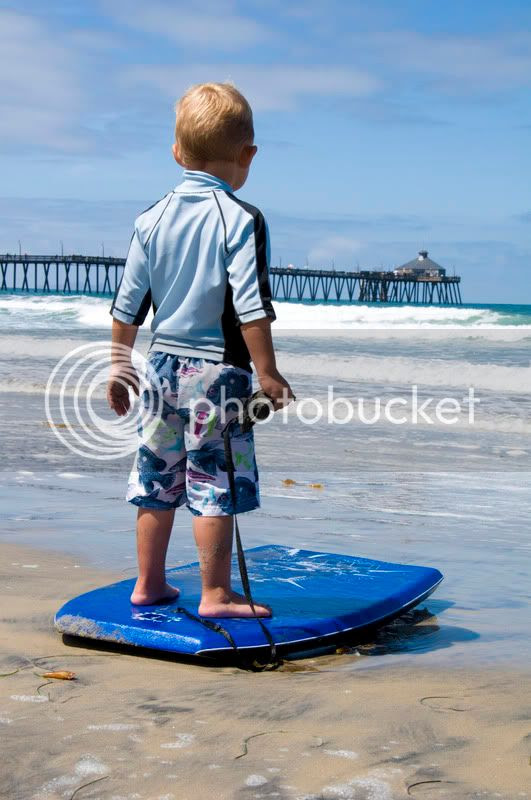 And he spent a lot of time thinking about boogie-boarding. 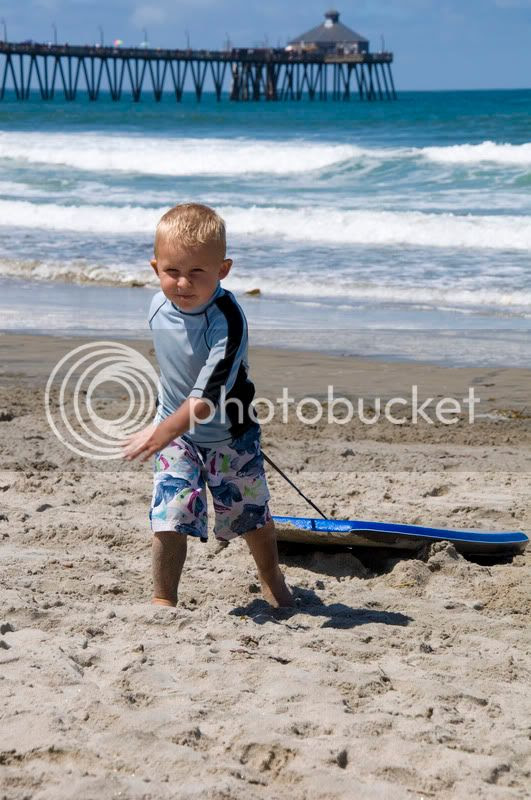 But never did. Maybe next year. In fact, I don't think he fully got in the water once. 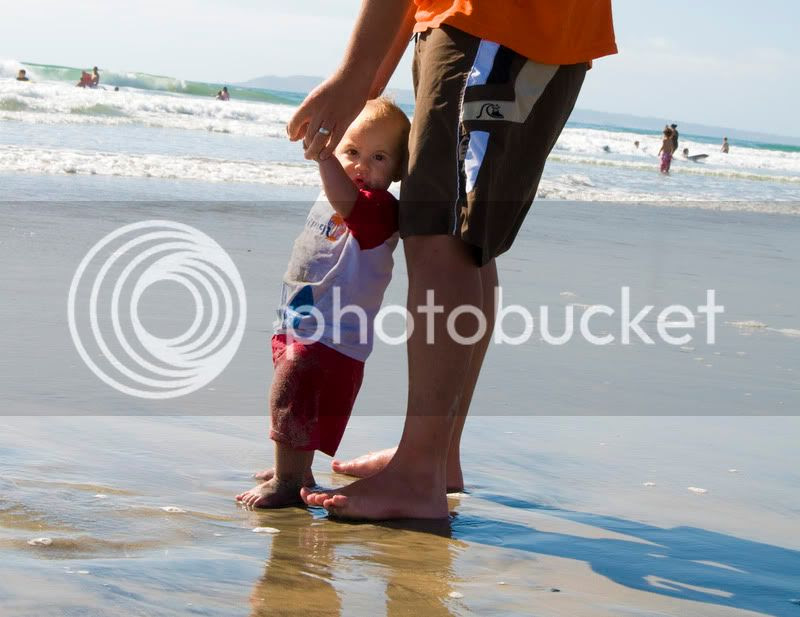 Teichert, on the other hand, loved the water. 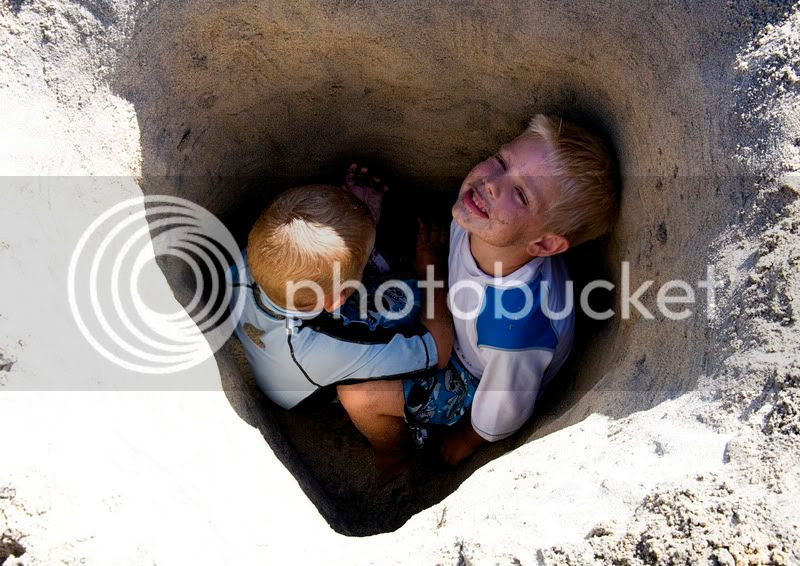 Booker just preferred to play with his cousins. Or in this case, fight with them. This picture cracks me up. I noticed that Booker and Dax were missing and when I asked Clark to go look for them, he found them in this hole... locked in a death grip. Who knows what the started the fight, it clearly wasn't going anywhere. 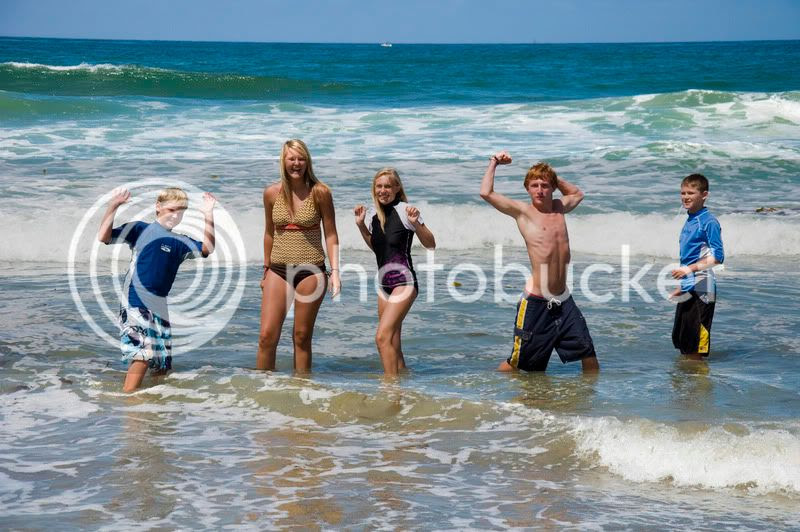 I love this shot of my nieces and nephews. 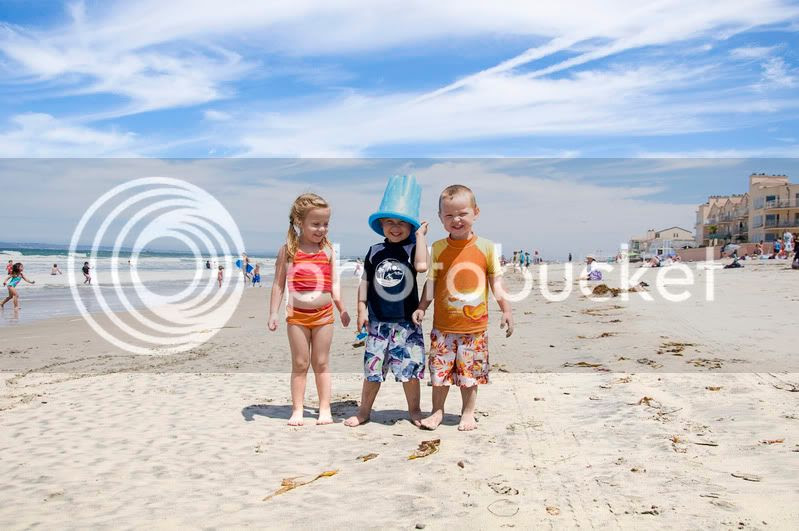 And this one of Brenley, Booker and Trigg.
And here are a ton of photos. Like I mentioned before, I lost a bunch. And that included one of my brother-in-law Dan that I promised would make the blog- will an honorable mention cut it? I'm so disappointed, but at least I have some photos to remind me all tremendous fun we had. Can I start a countdown until next year's trip? 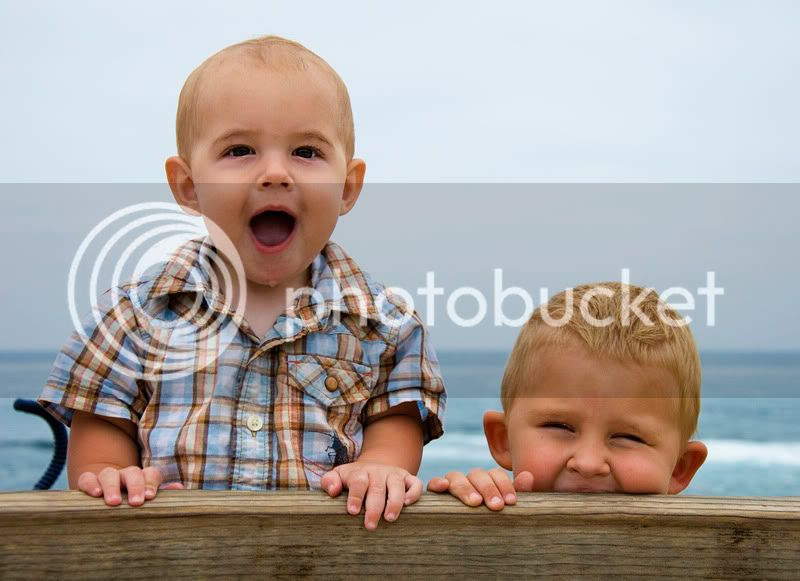 I think I've been so reluctant to blog about our vacation to California because it will mean that it really is over- long gone until next year. Plus, I was stressing over giving a talk in church yesterday and throwing a birthday party for Booker on Saturday, but now that all that is over, I'm out of excuses.
I'll start with our quick trip to the La Jolla coves and seal colony. Apparently, it's a man made cove that was intended to be used by children but eventually the seals took over. We saw a good number of seals, including the cutest little baby seal. Then we tried to get Booker to check out some of the caves but he was having none of it. Maybe next year.

to a blog near you- a report on our awesome vacation to San Diego complete with tons of photos but sadly, not all of the photos I took because I lost several to an overly full laptop hard drive. Grrrrrrrr, my insides hurt thinking about those lost photos.
Anyways, I'll return to my usual blogging frequency as soon as I get back into the swing of things, namely learning how to shop, cook and eat vegetarian (Clark's idea, not mine). Tips? 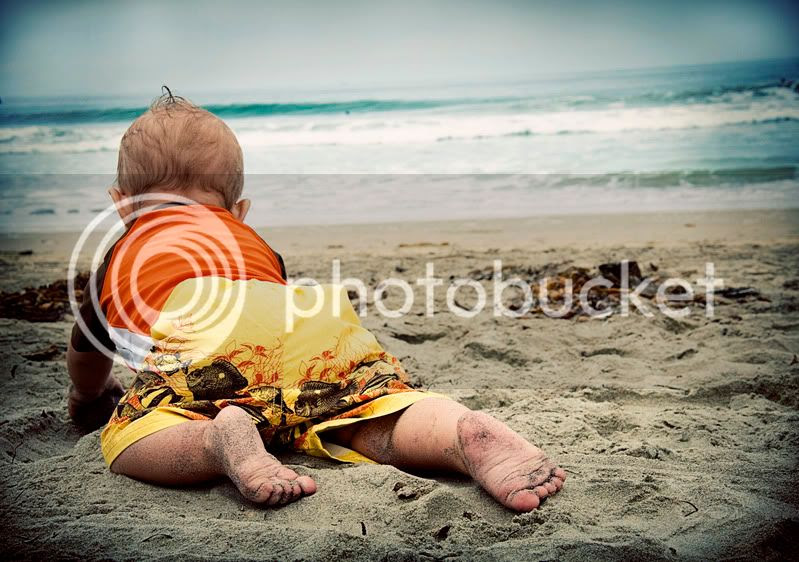