We did most of our Halloween celebrating yesterday and both our little Spidermen had a blast. 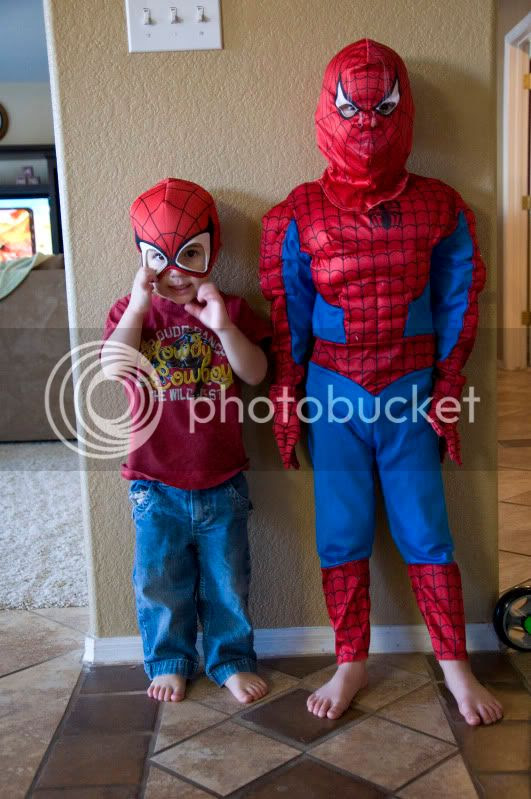 We headed over to the Ward Halloween Carnival where I finally got to wear my Egyptian Queen costume, courtesy of Dr. Ragab's Pharaonic Village and my Egyptian moo-moo courtesy of some little shop on Bab Zuweila street. Now I'm feeling super excited for another trip to Cairo. Clark tried to match as best he could. I ran all over town on Friday trying to track down a Pharaoh costume with no luck. Maybe next year. Mark Anthony and Cleopatra? Sure. 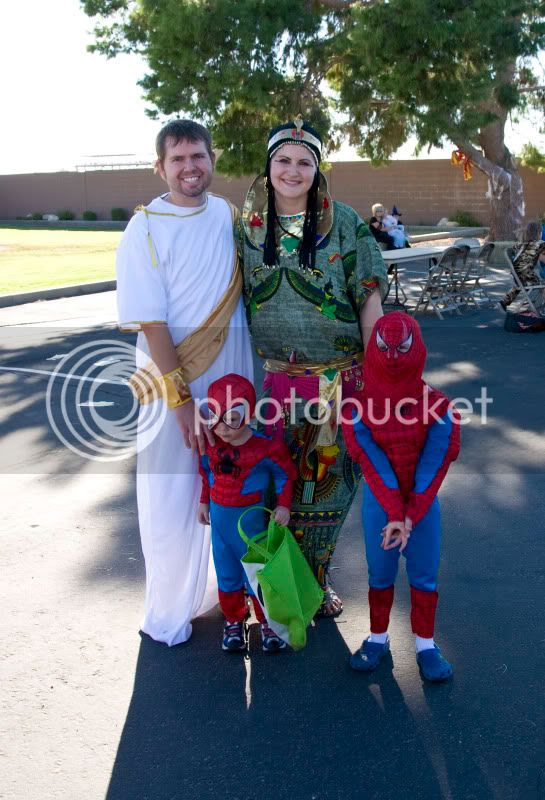 Ike was a little unsure about the hayride. But he loved all the carnival games and came home with a treat bag heavy with candy and prizes. 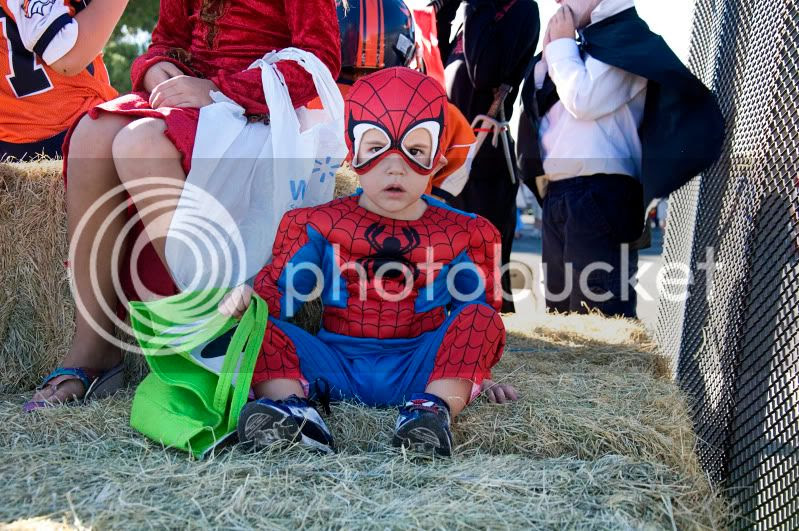 After the party, we headed back to our neighborhood to trick-or-treat. Booker changed into costume number three, "little boy Anakin." Our neighbor (who is a HUGE Star Wars fan) pointed out that he is actually Pod-Racing Anakin from Episode 1. I was able to confirm this on Wookieepdia ;) I'd like to point out that Booker is obsessed with Star Wars even though he hasn't seen any of the movies. 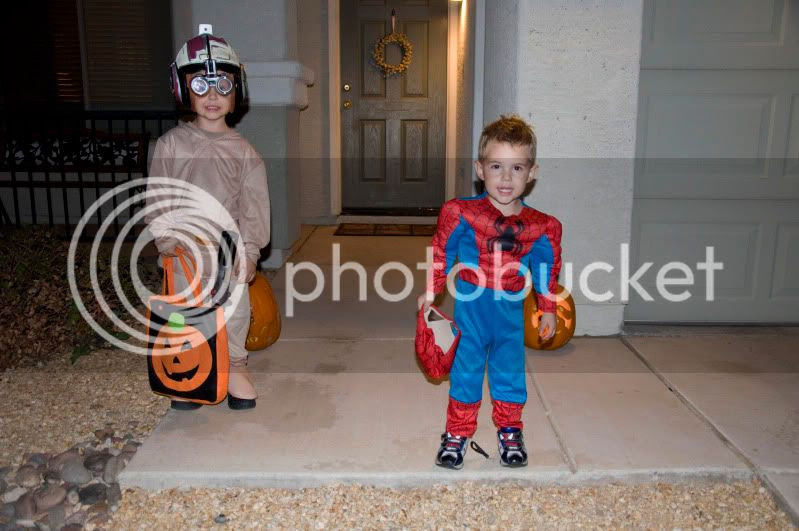 We came home to a very tired and very adorable Monkey Amara. We loved having Marie and Amara here for Halloweekend. Maybe next year she can trick or treat with us. 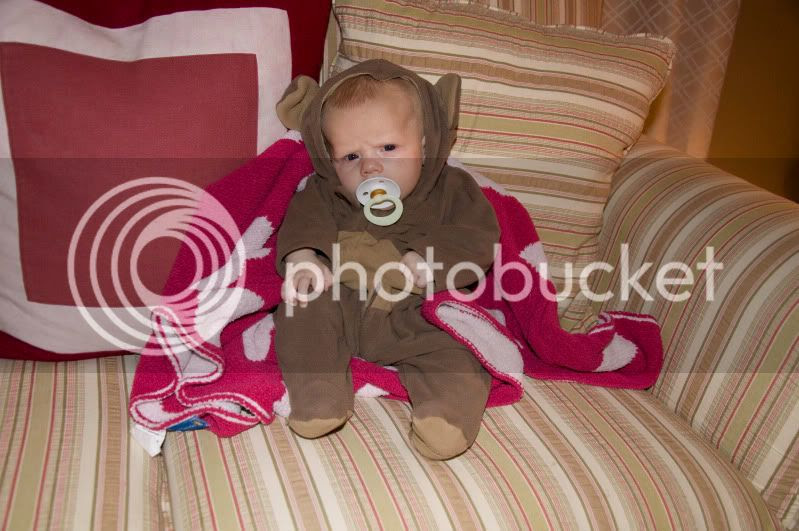 Hooray! Let the week of joy school/preschool/ward Halloween parties begin! We kicked it off last Saturday with a trip to the pumpkin patch. Slideshow here.

Today we went to Booker's joy school Halloween party. I can't believe Ike let me dress him up as a chicken. That's my boy. 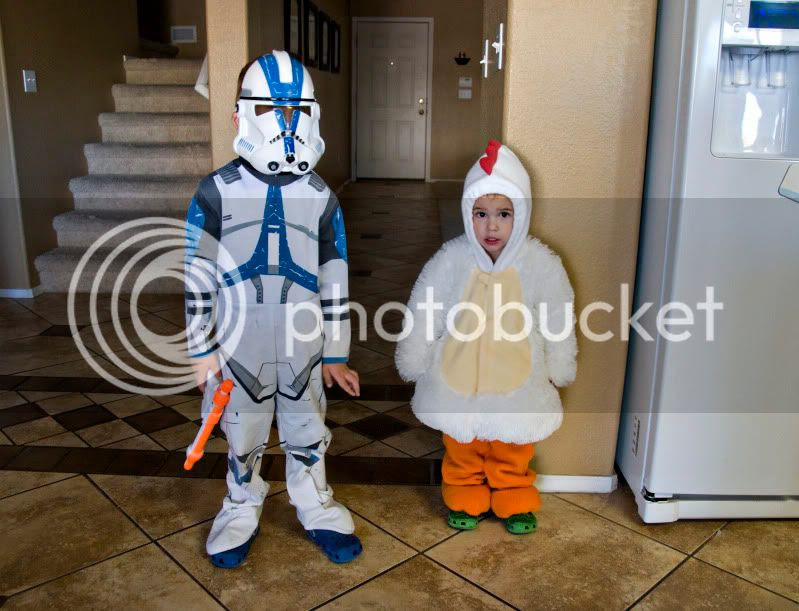 Then we spent the afternoon carving pumpkins (we meaning me). I don't know why I insist on such elaborate pumpkins. After Dora and Diego two years ago, I swore off super involved designs. Crazy how quickly I forget. 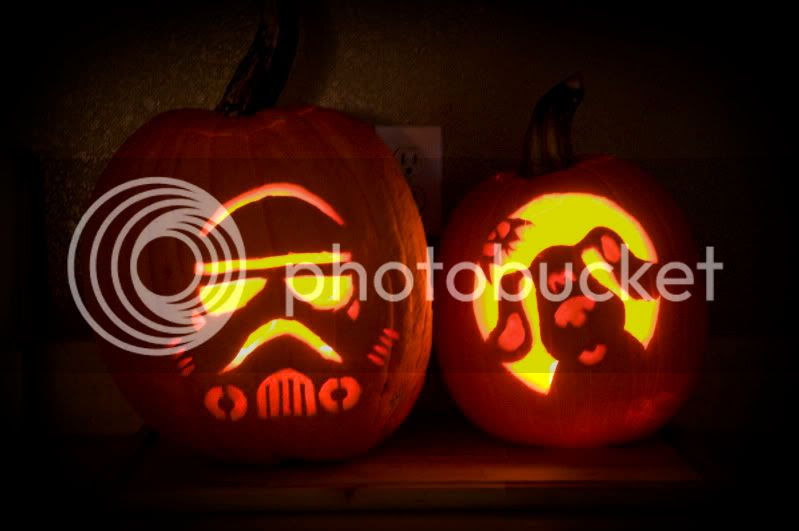 In case you can't tell, that's a Stormtrooper (named Cody according to Booker) and Mr. Blues Clues himself.
Posted by Margaret Proffitt at 6:02 PM 3 comments:

My "Not Tonight, Honey" Pajamas

Have you ever thought to yourself, "Hmmm, I wonder what a full grown woman and a lemon sized fetus would look like stuffed into some sock monkey footie pajamas?" 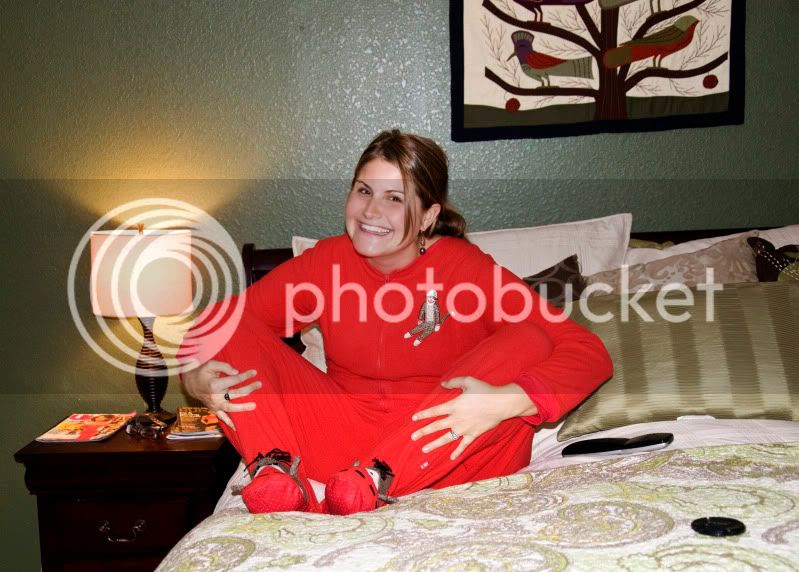 Well, you're not alone because my sister had the same thought when she gifted me with these awesome PJ's for my birthday!
***
The other day Booker was telling me how he was going to share his toy room with his new baby sister (how generous of him) and how he would let her borrow his storm trooper costume occasionally. I interrupted him to point out that we don't know what kind of baby we're having. It could very well be a baby brother he'll be sharing with.
He was quiet for a second and then solemnly proclaimed that, "Jesus will decide."
So here's one for Booker's scrapbook. 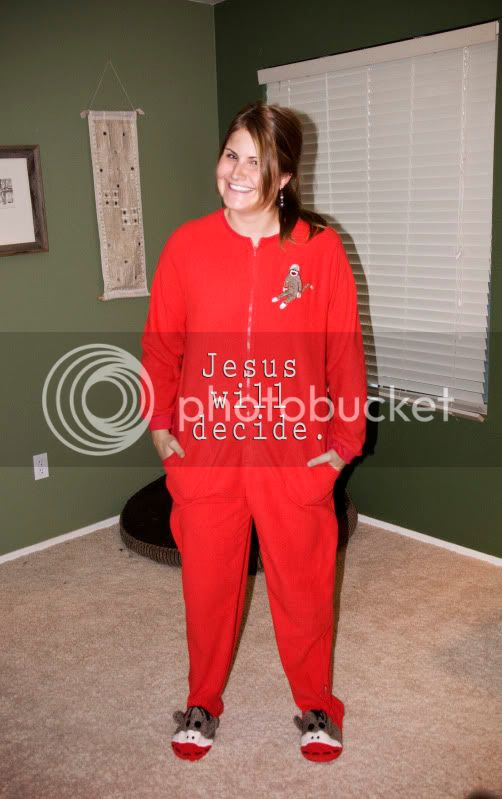 I realize this is my fifth post in about a week and I don't think I'll be able to keep up this pace. I reserve the right to quit posting for weeks at a time and still go to bed 8 o'clock every night. Please?
Posted by Margaret Proffitt at 7:03 PM 6 comments:

Remember this last year? Well, it happened again and this time my mom was able to participate. Here's a little report from my dad:
"We estimate there were about 10,000 people this year. Survivors got pink t-shirts. We ran into the group from Curves Egypt and threw in a photo with them for Grandma Tueller. There are pictures both up at the top of the plateau where the race started at the lookout point and then down below by the sphinx where it finished." 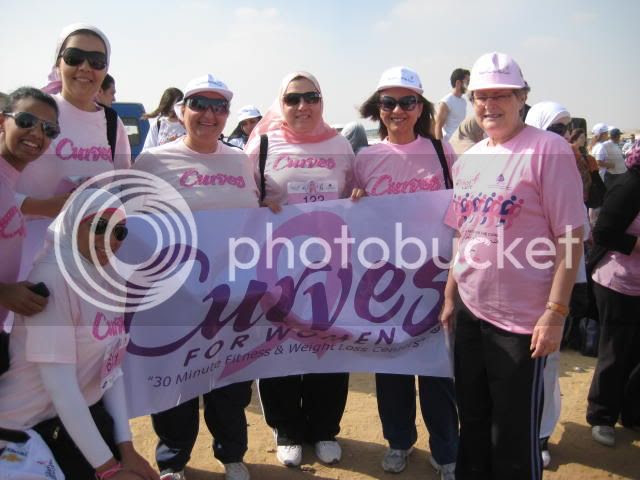 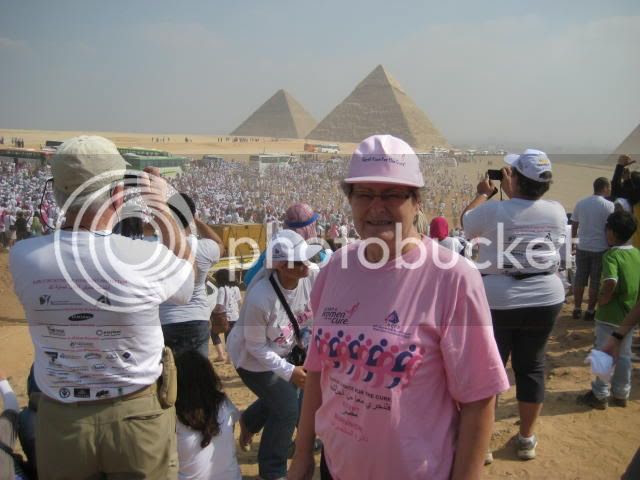 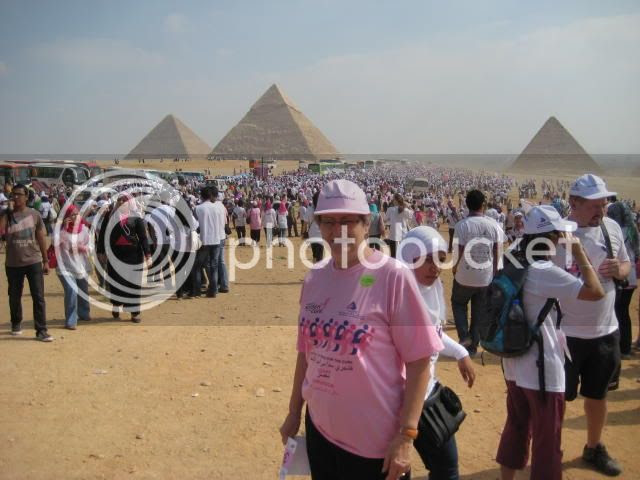 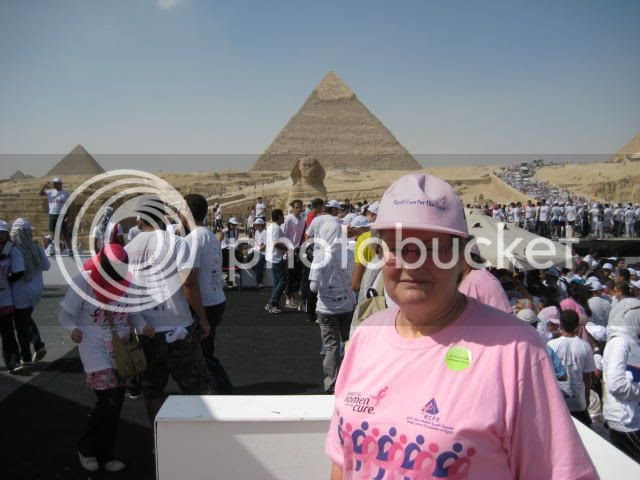 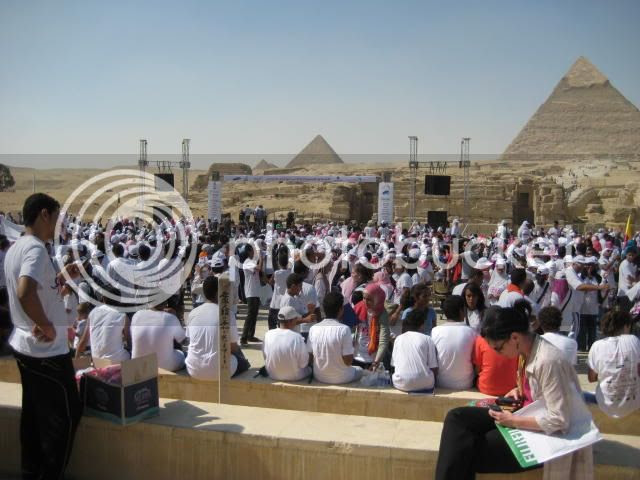 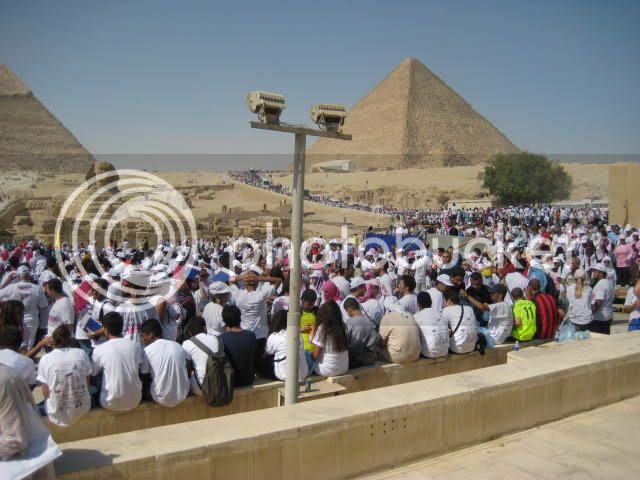 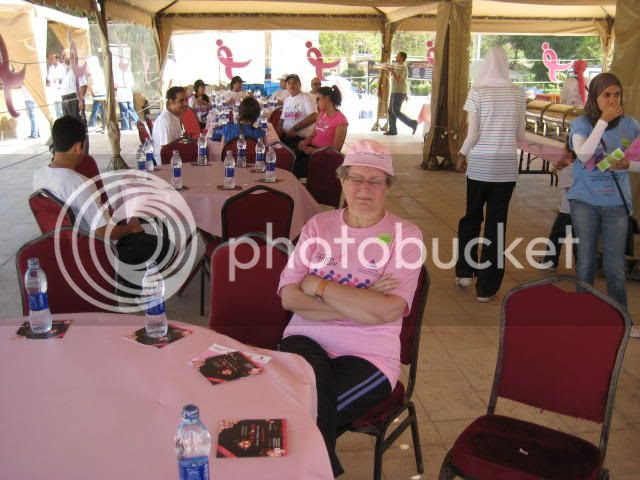 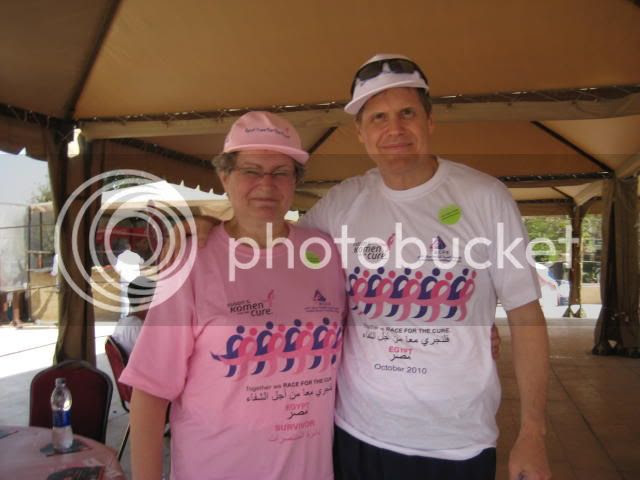 This makes me so happy! This time last year, my mom was back in Utah in the middle of chemotherapy. She was bald and miserable and sick as a dog. This year, she was able to participate in the race. This year, she is cancer free, has curly hair (it grew back in differently) and her prognosis looks good. This year, she gets to show off the new boobs she got out of the whole ordeal.
This time last year, I was blissfully unaware that I carry the BRCA gene. I thought my risks of breast and ovarian cancer were the same as everyone else. This year, I'm armed with knowledge and a team of cancer specialists who really, really, really don't ever want me to get breast cancer. This year, I get letters from my insurance company gently reminding me that they will cover the cost of a prophylactic mastectomy and reconstruction. This year, I'm happy with my choice to screen for breast cancer and not jump to surgery (maybe in ten years, but not this year). This year, I have much bigger medical bills but I'm hopeful about my future.
For October 2011, I hoping that my sister will have been tested for the gene. She has a 50/50 chance of carrying it. I hope I took one for the team, but the odds don't care about that. She kicked alcoholism's butt, I'm interested to see what she can do with breast cancer.
And because I love my three little brothers so much, I would encourage them to get tested too. Men who carry the BRCA gene have slightly increased odds for breast cancer, prostate cancer and skin cancer. Plus if they have daughters, they could pass the gene onto them. So maybe that can be the plan for Octobers of 2012, 2013 and 2014?
I'm glad you made it, Mom. It was an awful, terrifying and depressing year for you. But let's hope it was just that- one terrible year among many, many happy ones to come.
Posted by Margaret Proffitt at 7:06 AM No comments:

My neighborhood can be really beautiful. I complain about living in the middle of no where but when I see the hot air balloons soaring over fields of cotton I think to myself, "Man, that's so stunning. I wish I lived closer to a Target." 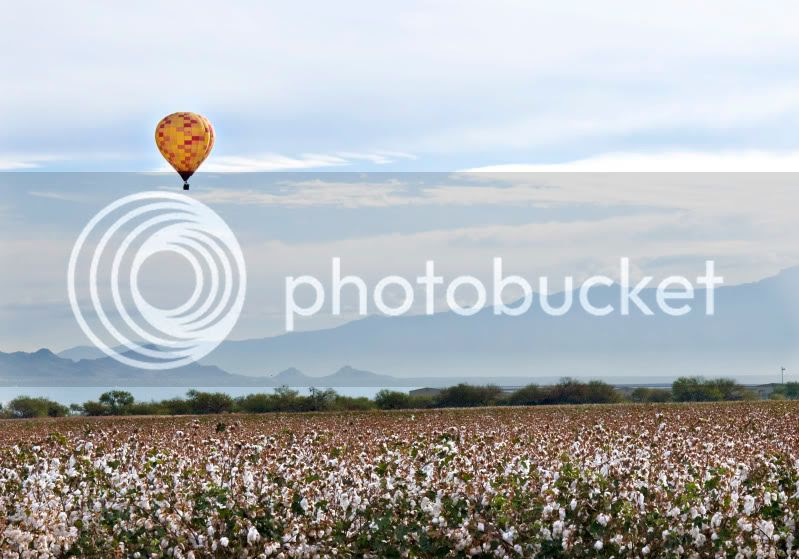 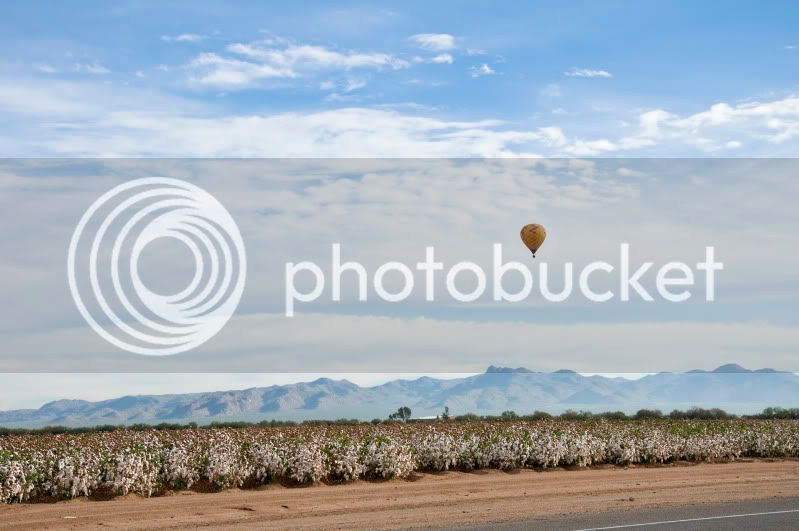 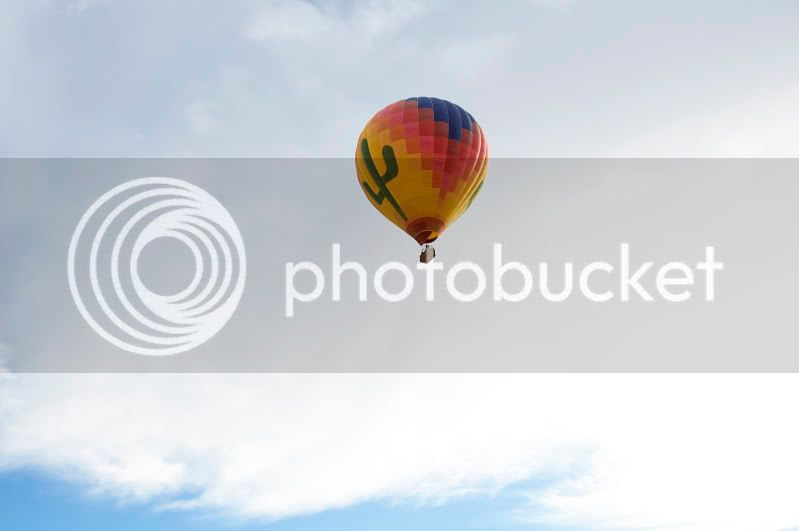 This morning on the way to the Desert Museum, we saw the balloons as they were landing. It was pretty cool. Almost as cool as the prairie dogs at the Desert Museum. I love those little critters.
And trying to get Booker and Ike to look up at the same time is an impossible task. 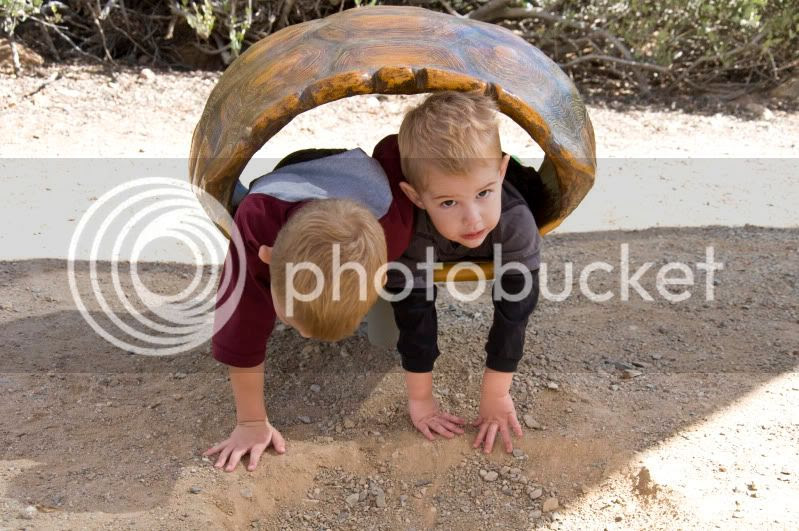 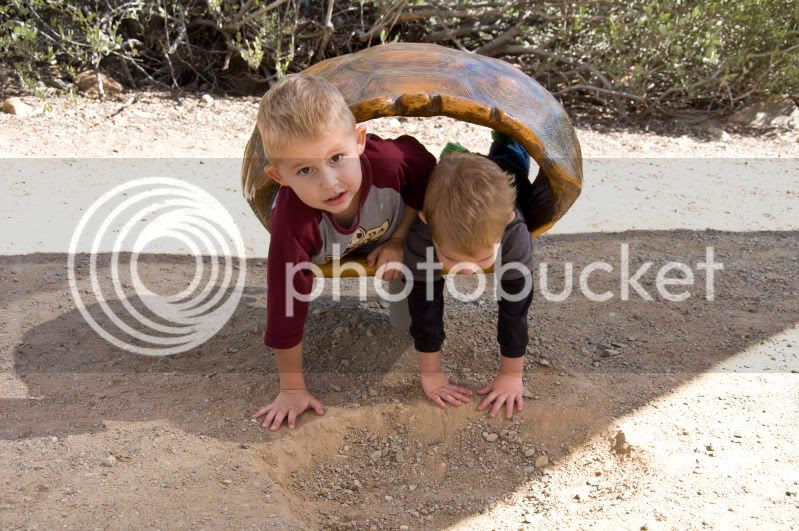 Ode to the Pregnant Husband

Pregnancy is hard on me. And I certainly do enough complaining that everyone knows it. So at least I get my share of sympathy and free passes. But, Clark... poor, poor Clark. Pregnancy is harder on him and he doesn't even get to complain. No one ever remembers the poor pregnant husband, do they?
I feel like I've been living under a anti-nausea-med-induced haze the last couple of months and as I come out of it, I'm beginning to realize how much Clark has shouldered on his own. He's been a single parent for quite some time now. Going to work for twelve hours and then returning home to piles of laundry, a dirty house and attention starved children. I wander off to bed leaving him to organize, clean, bathe and bed. AND HE DOES. Every time. Without a word of complaint. It's incredible. He's incredible. I'm incredibly lucky.
Curious, I googled "ode to the pregnant husband" to see if anyone else felt as blessed as I do. Among the top results were articles titled, "Pregnant Woman Stabs Husband in Stomach" and "I'm Pregnant and I Can't Stand My Husband's Odor." I can honestly say I've never been close to stabbing Clark in the stomach which is saying a lot because my hormones have been pretty wacky as of late. And as for the odor thing, I'm pretty sure my odor is worse than his... my legs harrier, my breath stinkier, my overall grooming habits much more questionable.
So thank you, my darling. If it weren't for you, our children would be in protective services, our toilets covered in mold, our fridge devoid of food and I would be... well, probably still stinky and harry and gross unfortunately.
And just because I hate to post without any pictures... here's what my camera has been holding for the last two months. 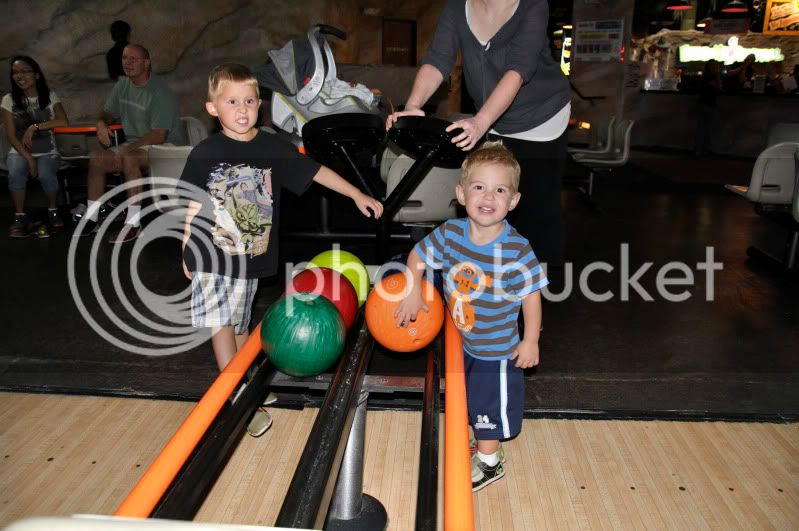 Marie, Kyle and Amara came to visit Tucson (in August?) and we went to Bedroxx Bowling. It's clear that my complete disregard for personal appearance is rubbing off on my children. Oh dear. 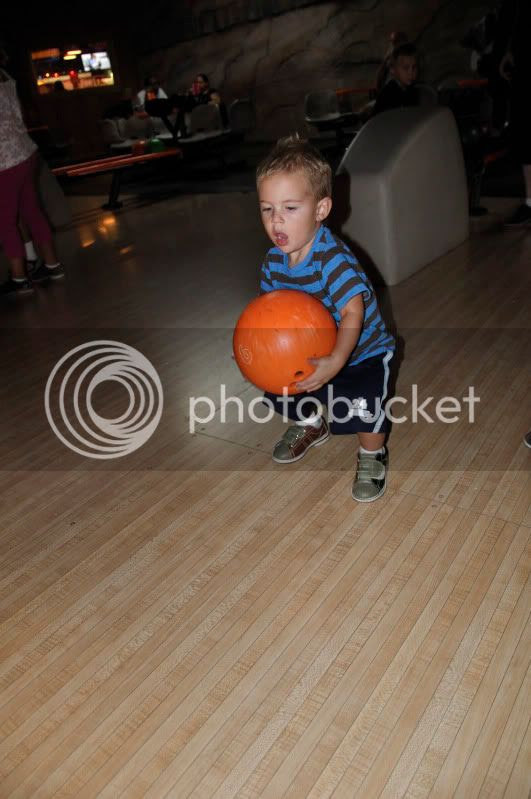 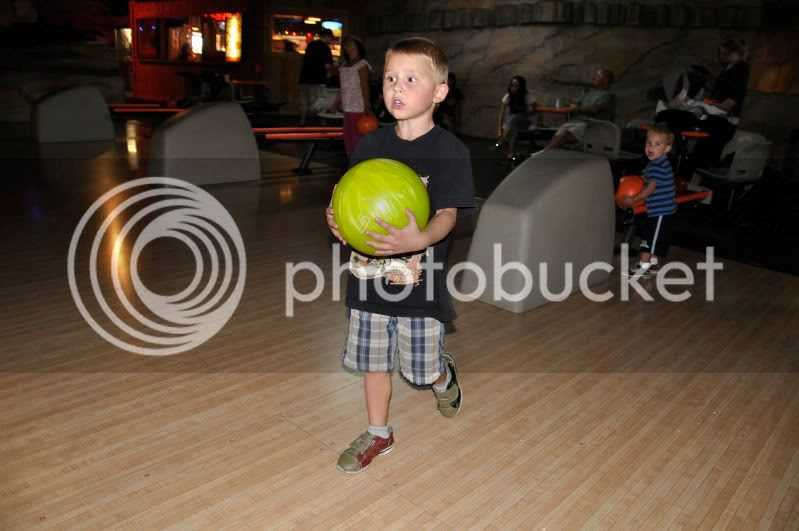 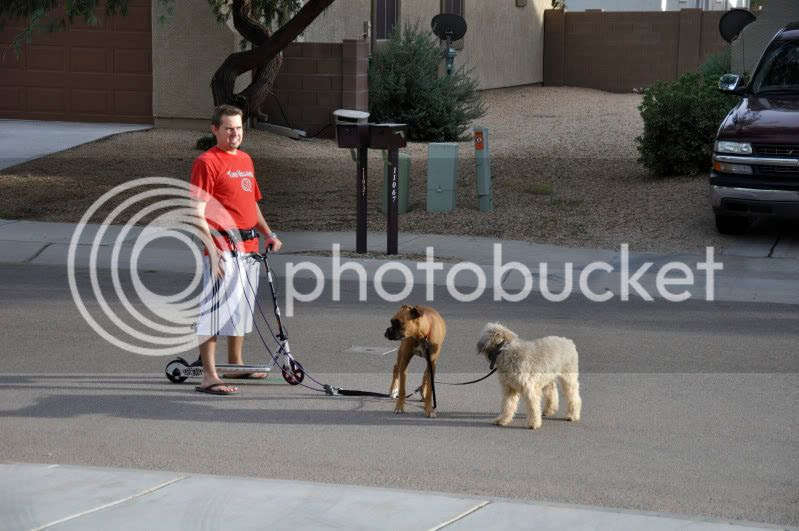 Clark engineered this hands-free double leash so he can take the dogs running in the mornings. It's pretty awesome. There's even a pocket in the back for a water bottle. Don't even think about patenting it. It's ours! (And to our friends, the Bennetts, whose dog we've been watching- this picture was taken before Clark decided it was a good idea to "groom" Kye. I hope you'll decide to still be friends with us when you come back home!) 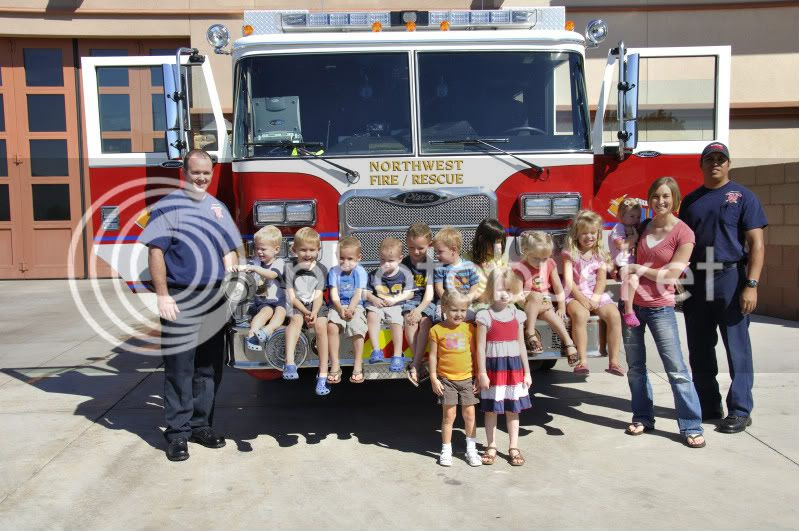 Here are some shots of Miss Amber's preschool class field trip to the fire station. Did you know that October is fire safety month? Thank goodness for awesome teachers like Miss Amber because otherwise it would never occur to me that Booker is capable of learning how to dial 911. Does anyone else always underestimate their children like I do? I suck. 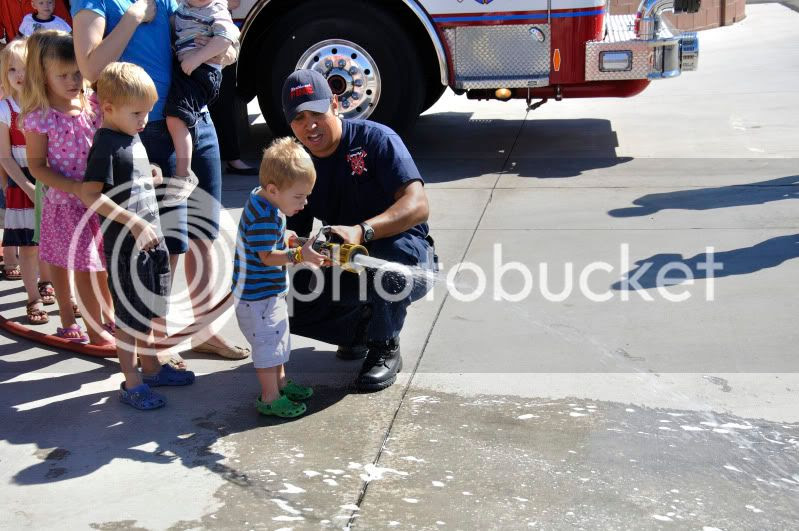 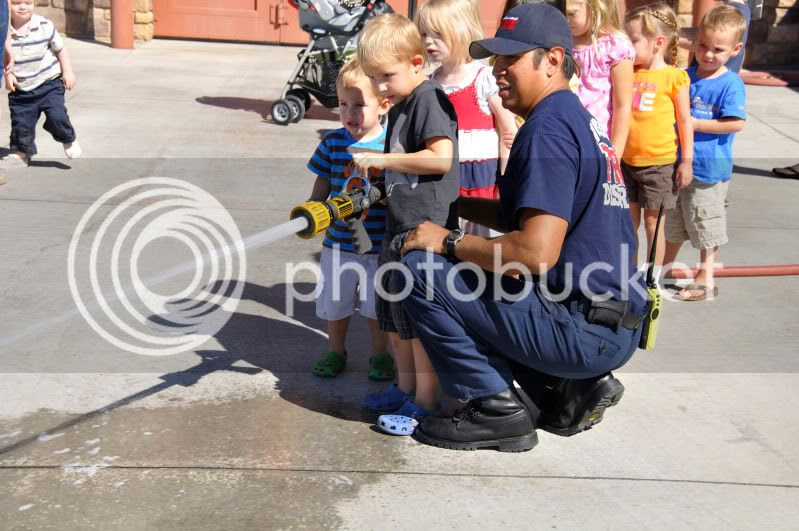 I tried to get Booker to listen to the new Sufjan Stevens album with me but he heard this Taio Cruz song on the radio and begged me to download it. Have I failed as a mother already?
P.S. I blame my sister-in-law Rebecca. Booker said that his most favorite cousin Dax sings this song. Booker and Dax have shared some awesome musical moments together.
P.P.S. Whoa, I blogged. And I didn't throw up once. I think I see a light at the end of this awfully dark tunnel. So long first trimester, hello second!
Posted by Margaret Proffitt at 2:04 PM 8 comments:

I've updated our blog header to better reflect our little family.
Sorry about the lack of posts lately. I've got a good excuse though. Hopefully, I'll be back to blogging when I start feeling better.
Posted by Margaret Proffitt at 8:20 AM 12 comments: