A Week in the Life of a Great Dad

Gah! I wanted to write this post yesterday in honor of Father's Day but between Asher's baby blessing and hosting a bunch of family over for lunch, I never got the time. But I spent last week anticipating Father's Day and trying to be more appreciative of the wonderful dad my boys have in their lives. So here's a week in the life of a great dad...
Monday: Great dads have their kids' best interests at heart.
On Monday, I sent Clark a text at noon, "I've got a killer migraine. I don't know what to do." By noon thirty, Clark was back at home with a little work station set up at the kitchen table. The boys were happily watching a movie. I was tucked away in my cool, dark bedroom for the next several hours. Sure, you could argue that Clark had his own interests at heart when he rushed home from work that day. Who wouldn't want to skip out on a Monday afternoon spent at the office? You could argue that he had my interests at heart that day. It was a killer migraine. But really, I'd like to think that Clark rushed home because he knew that three little boys should not be left to their own devices. They get into trouble when I'm on my A game, I can't imagine what kind of mischief they would have gotten into while I was incapacitated like that.
Tuesday: Great dads know that happy mom = happy kids.
On Tuesday, Clark encouraged me to go out with some friends in the evening. I was reluctant. It was a far drive. I was tired. I hadn't showered. I wanted to get into my pajamas and watch TV. I wanted to talk in length about the number of times I was forced to wipes bums that day. He insisted. I needed to go spend time with those ladies. I came home many hours later. I was rejuvenated. I was relaxed. I was so happy I went out. I was ready for another day of wiping bums.
Wednesday: Great dads are gentle.
On Wednesday, Booker woke up on the wrong side of the bed. Actually, Booker wakes up on the wrong side of the bed on any given day. I'm not around to hear it (six in the morning is still considered night time in my book), but I'm pretty sure this conversation takes place every single morning between Booker and Clark:
Gentle Dad: Good morning, buddy.
Bleary-Eyed-Bean: GAAAAyawnIWANTTOWATCHMYSHOWSRIGHTNOWyawnARGH!
GD: What can I get you for breakfast?
B-E-B: NUTHIN! I. AM. NOT. HUNGRY. I DON'T WANT BREAKFAST!!!!!!
GD: Alright.
B-E-B: Actually I want cocoa puffs.
And just with his tone of voice, Clark is able to turn that kid around and set him on a better path for the day. It works every time. When Booker grumps at me that way, I feel like throwing the box of cereal at his head.
Thursday: Great dads are creative.
On Thursday, Clark met with a business consultant firm to discuss the details of a really cool product he's invented. Asher presented him with a problem and he's solved it in a rather innovative way. My lips are sealed but hopefully one day every new mom will be registering for one of these babies at Target.
Friday: Great dads are like Coach Taylor.
On Friday, Clark and I watched Friday Night Lights together like we do every Friday night. I'm sure he was a good dad that day, but I don't remember. Also, Friday Night Lights just might be the best show on TV right now and possibly ever. If you're not watching, you're missing out.
Saturday: Great dads are fun.
On Saturday, Clark built swords for the boys out of dowel rods, foam and duct tape. Just because it's fun. I could have also mentioned that good dads are hard working because he also spent the day working his butt off to get our house clean for his family to come over the next day.
Sunday: Great dads are self-sacrificing.
On Sunday, Clark spent the day (his day, Father's Day) cooking, cleaning and entertaining 30+ members of his family and the best part is that he actually enjoyed it. He loves his family. For Father's Day, he probably would have preferred an iPad or some expensive wood-working tools instead of a picture of a plate from Color Me Mine. Just a picture because the actual plate wasn't ready to pick up. Wow, we are so lame. 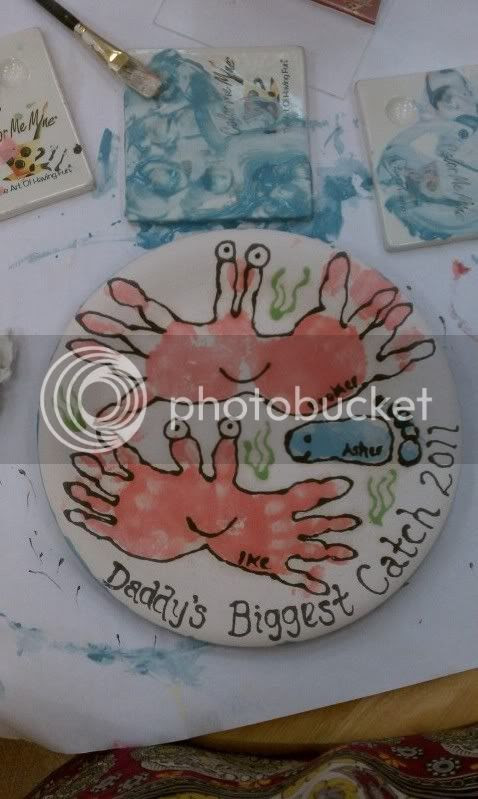 But while iPads and tools are certainly worthwhile, our annual family vacation to San Diego is even better. He feigned the appropriate amount of excitement over that plate and Booker and Ike beamed with pride.
I'm so glad my kids have a great dad in their lives. I'm thankful for my own great dad who warrants a blog post of his own one of these days. Happy belated Father's Day to the great dads in my life.
Posted by Margaret Proffitt at 4:53 PM 2 comments:

I've got about 2.5 minutes before Booker and Ike force me out to the pool for an afternoon dip, so here goes, in no particular order, what we've been up to in the month of June... 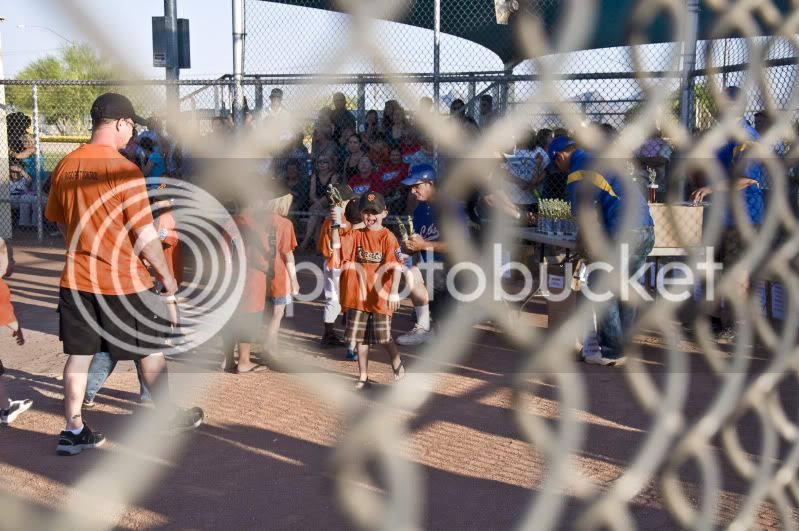 - Little League Closing Ceremonies. Booker got his long awaited trophy for participating in t-ball this season. He loves that darn trophy more than life itself. When we got home from the ceremonies, he wanted to go straight to bed (no stories, no goodnight kisses) so he could be alone with his precious trophy. No joke. We happily obliged. 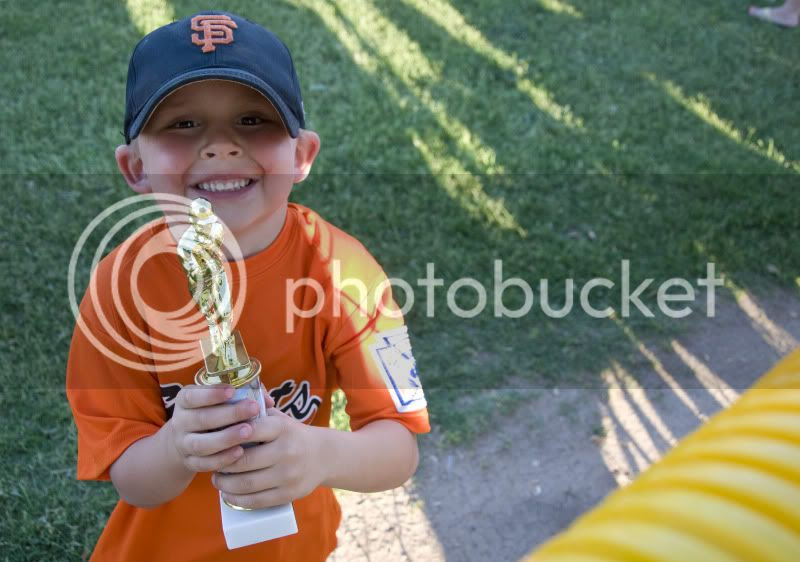 - Ike just might be officially potty trained. It's been a long few weeks full of ups and downs, good days and bad ones. It turns out, Ike can make me laugh at anything- even poop. He loves to describe his BM's after he's done. "It's a huge one." "It's a shark one." (?!?!) And my personal favorite, "It's got sprinkles in it." Boys are gross. 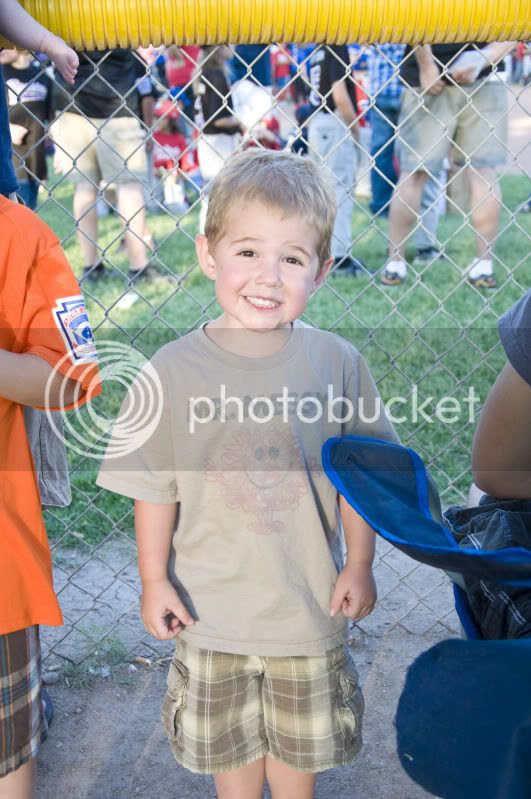 - Speaking of Ike, the kid is nearly 3 years old and we only now realized that he's got curly hair. Clark has finally figured out how to style his hair for church, but I haven't. Any tips on how to manage short, wavy hair? I'm perplexed. 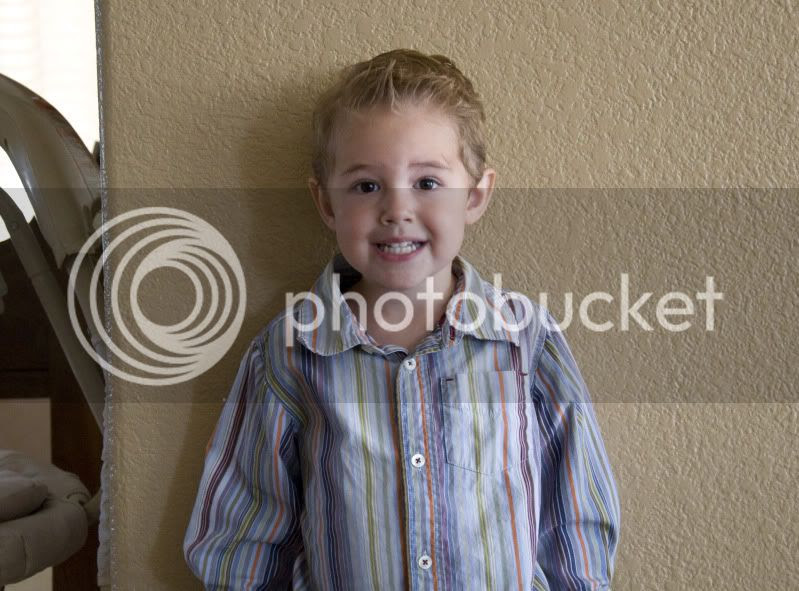 - We just finished a session of swim lessons. Booker did great. Ike freaked out the second week and wouldn't get in the water. According to him, he was afraid of lions. 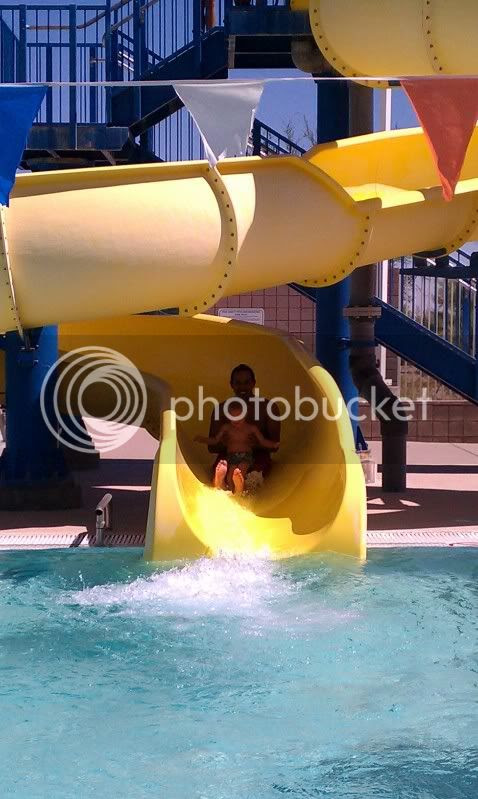 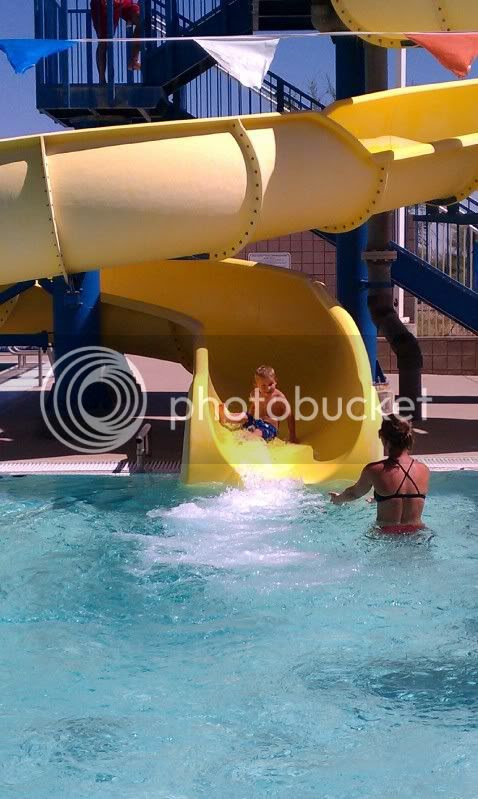 - Speaking of lions, the best way to get Ike to do something is to threaten that you're going to feed him to a lion/shark/spider. We're terrible parents.
- Speaking of terrible parents, Ike cried himself to sleep whilst sitting on time out for refusing to get in the water. It was a bad day for me. 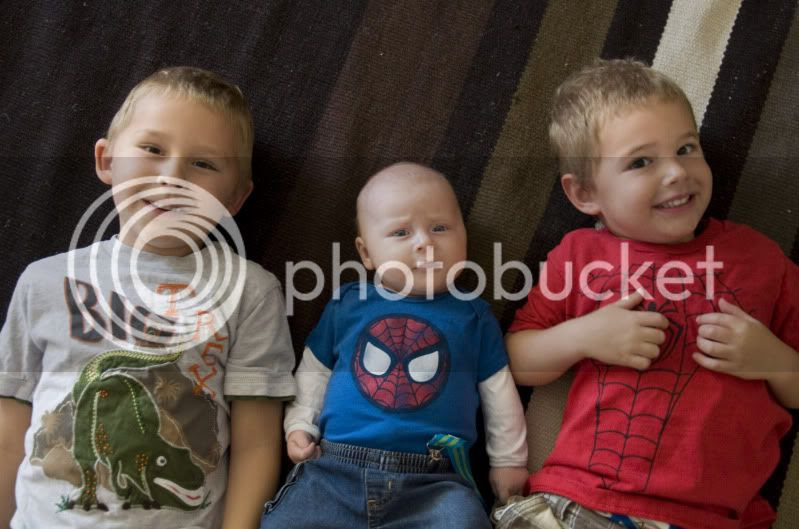 - Speaking of bad days, there's nothing quite like those chubby little heads to turn a bad day into an much better one. I love those guys.
Posted by Margaret Proffitt at 4:24 PM 2 comments:

What have we been up to?

Swimming. Swimming. All. Day. Long.
Sometimes Ike gets to skip his nap to join in on the swimming fun. The result can be hilarious.
Posted by Margaret Proffitt at 5:20 PM No comments: