Chances are, if you've ever flipped through a copy of the Ensign then you've seen a Minerva Teichert painting. You may not know, however, that she was a pretty interesting and rather amazing woman... a sort of cowgirl with a paintbrush. There is so much I love about this woman... I could go on and on. First, her name was Minerva Bernetta. You've got to be a strong female to go through life with a name like that. She paid her way through art school by performing rope tricks, Indian dances and sketching medical cadavers. She wore her characteristic headband to "keep her brains in." She paid for her kids tuition at BYU by donating the Book of Mormon paintings that still hang in the JSB. She had an extraordinary understanding of the human figure and people often came to her with broken bones. At funerals, she would help herself to a bouquet of flowers. A day or two later she would present the grieving family with a still life of the bouquet. She was an outspoken political conservative who fought to keep bootleggers out of her hometown and spoke out in support of women's rights. Although she was one of the top students at the Chicago Art Institute, she chose to return West and marry her sweetheart. She chose her faith and family without forsaking her art. I recommend reading this Ensign article and this BYU Magazine article to learn some more about her life. But if you don't have time for that, then here are some of my favorite excerpts:

She had a mission as an artist and that she should place her art in the service of her faith. Minerva later recorded how Robert Henri asked her, shortly before she left New York, whether any artist had ever told the “great Mormon story.” " ‘Not to suit me,’ I answered. ‘Good Heavens, girl, what a chance. You do it. You’re the one. Oh, to be a Mormon.’ I said to him, ‘You could be.’ He paused almost reverently for a moment, then answered, ‘That’s your birthright. You feel it. You’ll do it well.’ I felt that I had been commissioned.” (Unpublished ms., 1947.)

Herman and Minerca made their new home on a cattle ranch at Cokeville, Wyoming, where Minerva painted scenes of the “Bottoms” in a frieze around the living room. For more than forty years, this room was both Minerva’s studio and the hub of the Teichert household. She cooked meals on a wood-burning stove, occasionally adding a touch to a painting as she cooked. Every night while the family ate supper, she read to them—literature, history, and the scriptures.
In that same living room she developed a strong, original style as she painted hundreds of murals, portraits, and other works. The conditions were far from ideal for painting. The room was too small to spread out her larger murals. She sometimes had to fold the canvas, painting one section at a time. To see her murals in perspective, she would look into the large end of a pair of binoculars. The room had no north-facing window, so the light was constantly shifting. Distractions were constant. But somehow Minerva persisted. “I must paint,” she once explained." (Unpublished ms., 1947.)

In the early years of her marriage, money for paint was scarce. Often Minerva painted and sketched on masonite, scraps of wood, even brown paper. Although she valued her gift, she never overvalued her individual paintings. One of her sons rescued a Minerva Teichert self-portrait on a board she had been using when she chopped off chicken’s heads.

Perhaps even more important than her generosity with the few material goods she had was the way she tirelessly shared her spiritual gifts. Once, Minerva met a young woman who was considered the “ugly duckling” of her family. Minerva told her, “Why, you are one of the most beautiful girls I’ve ever seen,” and told her she wanted to paint her. “That girl blossomed because someone had recognized her beauty,” says Shirley Teichert, Minerva’s daughter-in-law.

She considered her art another of her Church callings and had grand dreams of a great art school in Salt Lake City. Ted Wassmer, an artist who knew Minerva when he was a young man, recalls her telling him that she would love to paint the ceiling of the Salt Lake Tabernacle, much as Michelangelo had painted the Sistine Chapel ceiling.

Minerva Teichert was a rancher’s wife and a gardener, a raiser of children and chickens, a maker of butter and biscuits, but at heart she was a storyteller, a teacher who found her greatest eloquence in bold brushstrokes on her entry-room wall.

Minerva Teichert lived her life at the border between the rustic and the refined, walking with one foot in the frontier and the other in the circles of culture and high society.

Minerva quickly emerged as a top student in her crowded art classes. When people questioned her choice of subjects for her art, she’d say, “There’s too much sagebrush in my blood to forget the beauties of rugged mountains [and] dry plains.”

But choosing marriage and family hardly meant forsaking art. To hear her describe it, one would think she had little choice in the matter. “I must paint,” Teichert would say. “It’s a disease.” Nothing—not the ranching duties she fulfilled, lead poisoning from her paints, or failing eyesight in later years—could keep her from painting. 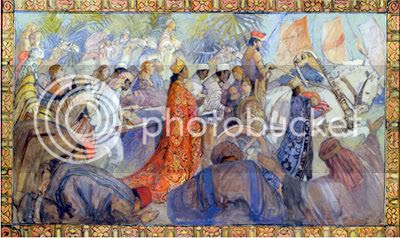 Those who knew Minerva Teichert best say the only skill that rivaled her ability to paint was her ability to talk. Most often, the two went together. Children and grandchildren universally recall coming in from the fields to use the bathroom or get a drink of water only to be detained as models for the current mural. And while they held their figures just so, Teichert provided her captives with lessons in art, scripture quotations, and commentary on the political problems of America.


When I worked at the BYU Museum of Art, I got to handle a lot of her works (which wasn't easy since some of them were so huge). Although I love her paintings, her prints (like the study of the Indian and her self portrait) are my favorite. I felt a certain reverence when I held those pieces in my hands. Its not easy being an LDS artist and trying to win respect, but Minerva Teichert was definitely a remarkable painter, an extraordinary woman and a faithful Latter-day Saint. I can only hope to be half as much.

Posted by Margaret Proffitt at 7:35 PM

thank you so much for your comments and remarks. I first discovered her art work when I attended the MTC and fell in love with the way her paintings made me feel, there is a certain spirituality about them. Clearly this comes from the type of woman that she was and that is expressed in her work.
Thank you for sharing.

I love how you described Minerva Teichert. You clearly understood who she was as a person. I saw some of her western art this week, and was so deeply moved by it. It's remarkable.

Thank you for your beautiful post about her. It moved me.

I saw her exhibit this week in Brigham City, and loved her work. I had seen some before, but I was very impressed with her small drawings and sketches. Thanks for your blog.

Interesting site, I love her painting of not alone, many are note aware that this great painting is viewable to the public at 655 so. Grant pocatello Idaho Pocatello 1st. Ward.

Very nice article. Minerva is my Great Grandma and it always makes me happy to see someone else inspired by her work and life. It has always been a great source of pride and inspiration for me as well. Thanks again.

My daughter and I had the privilege of being in the Minerva Teichert house where she did her painting in Cokeville, Wyoming, 9 August 2014, through the courtesy of Bonda Teichert. She cleared up a mystery of what happened to the murals in the Montpelier Stake Tabernacle and gave us an hour of her time. I had been in that house and met Minerva many years ago as a child, and have loved her paintings ever since.