Yesterday I called up my friend Bassant to see if she was interested in hanging out. I invited her over to the house, thinking she would stay for dinner and then maybe we could stroll around Zamalek and get some cupcakes or something. You know, something casual.
Well, she showed up with her mom and dad in tow ready for an all night adventure out on the town. It was six o'clock at night or as I like to call it- one hour from bedtime. My kids were both in basketcase mode, having skipped naps and woken up several times during the night (this jet lag thing seriously sucks). Plus they were in the middle of taking a bath and I hadn't eaten dinner. Basically, I wasn't prepared to go out and my kids were definitely in no shape to do anything but put on PJ's and pass out. Bassant insisted that I bring them, but I had to draw the line somewhere. My mom and I would join her, but my kids had to stay home. Chris and my dad stepped in as babysitters and I grabbed my camera and a headscarf, because you never know.
At first, Bassant wanted to take us to the light and sound show at the pyramids but I told her I was waiting to do that with my friends who are coming (plus I wanted to get home sometime before midnight), so we headed over to the Al Hussein mosque and Khan el Khalili instead. 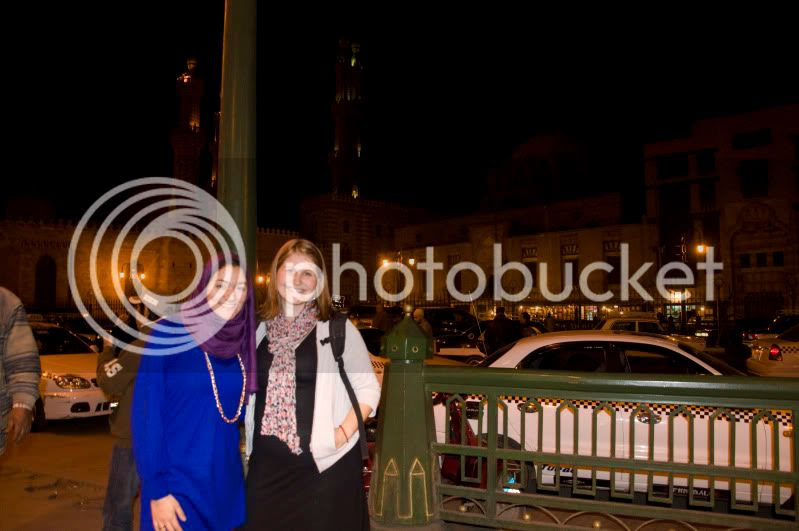 Bassant and I in front of the Khan with Al Azhar mosque in the background.
After visiting the mosque, we headed over to the famous El-Fishawy tea house for drinks. Once inside, I felt like everyone's favorite little tourist:
You have to smoke some shisha!
La shukran, I'm pregnant.
You have to get some henna tattoos!
Alright, as long as it's cheap.
You have to order the sahlep!
The what? Sure, order me one.
And THAT was the best decision ever. That stuff was amazing. It's a hot drink with milk and orchid extract, sprinkled with peanuts, raisins and coconut. Simply divine.
After tea, we walked around the Khan and shopped a little bit, although Bassant wouldn't let me buy anything. Every time I tried, she would inquire about the price and then walk away in disgust, telling me it was much too high and she would get it for me cheaper later.
Although I was frazzled at first, I'm really glad I got to spend the evening with Bassant and her parents. Since I saw her last year, she has gotten engaged. It was fun to scroll through the cell phone pictures of her fiance and talk wedding details. When I asked her if she would take her husband's last name or keep her own, she told me she didn't have to decide- they have the same last name, they're first cousins! How convenient. We talked about Mubarak and Tunisia, Disneyland and Justin Bieber. Clark is now faced with the task of tracking down a Justin Bieber poster and transporting it over here without squishing it.
For the most part it was an evening of easy conversation and great company. Although, things did get a little awkward when Bassant's father asked what kind of lawyer Clark is. Um, you know. It's like science and technology. And inventions. Protecting people's inventions. Does that make sense? I'm pretty sure by the looks on their faces, that it did not make sense. This is country where 40% of the population lives on less than $2 a day and one third of the population is illiterate. A country where it is someone's job to hand you toilet paper when you enter the bathroom. Protecting science and technology? Not really.
I'm glad I had my mom with me because she was the perfect excuse to cut the evening short. No matter how hard I try, I will never be able to function on Egyptian time. I told Bassant that next time she has a day off she better give me a call. We'll go shopping and listen to the Biebs. 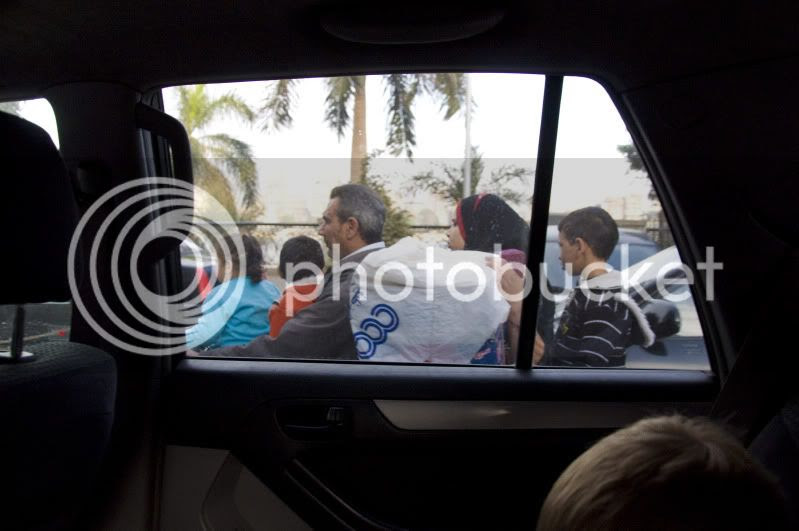 And just for fun, a family of five plus groceries on a motorcycle. Yesterday, it took an hour and a half to get from Maadi to Zamalek. I take my people watching pretty seriously in the car. Anything to pass the time.
Posted by Margaret Proffitt at 4:19 AM

I love your blog Margaret!
Just catching up on your posts, and I have to say, when I lived in Spain, there were a lot of Arabic shops and we LOVED to get falafel and sharwarma! mmm, eat some for me, as long as it doesn't give you heartburn.
LOVE the family traveling on the motorcycle. Pictures that show everyday life are so interesting...is it too much to request a picture of crazy foods you see/eat? :)
miss you guys!

I keep reading about all the craziness going on in Cairo and the rest of Egypt and every time I do I think about you over there pregnant with your two little boys! I know you are probably being well taken care of by the US Government, but you are still in our thoughts and prayers.

Margaret! I am sitting at my office at work and all day I listen to Fox news (listen, not watch, my back is to the TV) and Egypt is THE thing to talk about right now and I just can't stop thinking about you! So I got on your blog and thank goodness you posted something yesterday because I was just praying that you and your boys are ok. Keep the posting up because all that stuff going on over there makes me worried for you!
Have tons of fun too :) <3Jenessa