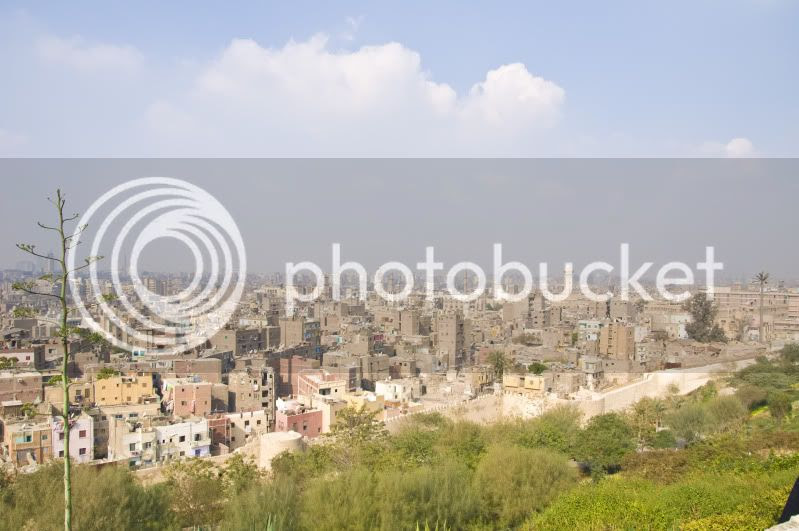 I'm feeling some pressure to blog everything I do in Cairo, which is fine except that we haven't done much lately. I'm sure that will change once our good friends the Glausers show up and the serious touring begins. Until then, we've been lying low and trying to establish some sort of normal sleep pattern. Not going so well- I just woke up from a 2 hour afternoon nap. Thanks, mom!

We did make it out to Al Azhar park today. Al Azhar park, the park that doesn't allow balls or walking on the grass, which sounds like a bummer of a park but it was just what the boys needed. We played on the playground (attracting only minor attention from the other kids and their cell phone cameras), ate some lunch, strolled around the grounds and tried to soak up some Vitamin D through all that thick Cairo smog.

Some observations from the past few days...

- My feet swelled up like huge sausages on the plane ride over. They're just now starting to return to normal size. It's really strange to not recognize your own feet. I tried to teach Booker how to massage my feet but he just ends up punching them.

- Sweet potatoes must be in season because all the street corners have little oven carts that will bake them up for you over a fire for one pound (18 cents). I can't wait to try one.

- Which leads me to street food. I had decided that I should probably refrain from eating street food and just stick to clean looking, well established restaurants. At the very least, street food might aggravate my heartburn. At the very worst, I might get a bad case case of diarrhea which would give me contractions which would lead to early labor which would lead to a premature baby in a NICU-less Egyptian hospital. Totally plausible, right? Street food = dead baby. But all that changed when I got here and remembered how much I love koshary and tamiya (falafel) and sharwarma. When I was little, my parents would call me the Sharwarma Queen. I think I'm more of a Tamiya Queen nowadays. I had three tamiya sandwiches for lunch. THREE!?! Did I mention that I have a new prescription for my heartburn that is super effective?

- This might be a broad generalization, but I think Egyptians are eager to help foreigners. Maybe overly eager. Today at the park one of the security guards came running at me to inform me that my park ticket was halfway out of my back pocket and IT COULD FALL OUT AT ANY TIME (I was already inside the park and didn't even need my ticket anymore). Except he didn't speak English and I don't speak Arabic, so he spent a lot of time pointing at my butt looking concerned. I was really embarassed.

- Another broad generalization? Egyptians are much better parents than I am. I sat on the park bench drifting in and out of sleep this afternoon while other parents helped my kids up onto the slides, pushed them on the swings and acted concerned when they would face plant in the sand. Back in the states, I would be very alarmed if a heavily bearded man volunteered to push Ike on the swing. Today though, I would have hugged that nice Egyptian man if it weren't considered so inappropriate.

- Zizou is a nickname for the Egyptian footballer, Mohammed Zidan whose jersey Booker was wearing today. I didn't know this so when everyone kept yelling Zizou in our direction, I just assumed they loved Wes Anderson films as I much I do.

- Remember how I said that the culture shock might be less intense this time around. I was wrong. The traffic here still leaves me speechless.
Posted by Margaret Proffitt at 6:53 AM

oh the heartburn. what are you on?

Aciphex. It's expensive stuff but much better than taking 6-7 zantacs a day.

I love you margaret! The little story about about the egyptian pointing at your butt and looking concerned made me laugh out loud. Good thing I was sitting down or else I would have peed my pants.

I'm so glad you made safe and mostly sound! I am totally gonna put the pressure on your to blog while you are there. You have to show me everything I'm missing out on. I want to hear about it ALL!

I love your trips to Cairo because you blog like crazy. And at the risk of sounding obsessed, I LOVE YOUR BLOG.
-Ashley

Did you not get stockings for the plane ride? I had a tight socks which help me avoid blood clogs on the plane. My feet were tired but they were perfectly fine after 33 hours of travel.
Oh... I miss Tamiya!!!!