There's a Party in my Tummy... So Yummy 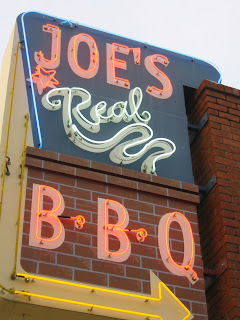 With the move to Tucson and my recent, (Clark, its recent) unwillingness to cook anything in this heat, Clark, Booker and I have been on a tour of sorts. We'll call it a food tour bidding farewell to all our favorite Mesa eateries. So far we've been to Cafe Rio (more of a Utah establishment but since Tucson doesn't have one we needed to get our sweet pork fix in), Bellagio's, Joe's Real BBQ and Krispy Kreme (again, Tucson doesn't have one). Tucson does have a Texas Roadhouse and In-and-Out Burger which I hadn't expected.
So I'd like to pose a question for any Tucsonite readers out there: what are your favorite places to eat? We've been to El Charro Cafe (a Tucson institution apparently) and had the Carne Seca. And we've eaten at Beyond Bread where I fell in love with everything on the menu- delicious sandwiches on yummy bread with unusual ingredients like hummus, brie, cranberries, curried chicken, eggplant etc. I had a cheesecake brownie there that was UNREAL. I took one bite and told Clark that I wanted to put the kids in daycare and get a job working at Beyond Bread. I don't care if I have to bus tables, I just want to be close to all that scrumptiosity.
Can you tell I've been thinking a lot about food lately? I've only got 56 days until Baby No Name arrives and its back to strict diet and exercise. But until then, I'm letting loose... so point me in the right direction.
Posted by Margaret Proffitt at 1:43 PM

Hey congratulations on the big move. Sicne I know close to nothing about Tuscon, I look forward to reading all about it from you.

I've got to say, my favorite restaurant here by far is The Melting Pot. It's quite expensive and not at all child friendly (open flames and toddlers don't mix), but oh so good. It's good for fancy celebratory dates and such. I recommend going with another couple so you get to try more stuff. El Paso BBQ is really good, too and I'm not usually a huge fan of BBQ.Other than that, I don't have any great ideas. And if you find anything good, let me know!