A Walk in the Wash 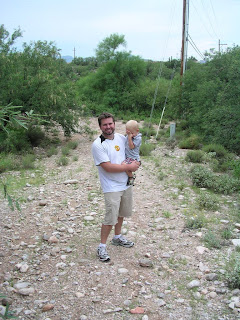 For the past week, Clark has been waking up at five in the morning to go running because he's nuts. Well, on one of his runs he discovered a little trail that runs through the wash that surrounds our neighborhood. Since we love to take family walks and since I'm sick of walking (waddling) through our neighborhood streets, I was delighted with this new discovery. Today, after the rain stopped, we decided to go check it out.
Now at the moment Booker had three major concerns in life- bugs, thunder and rain (he's also afraid of dirt because on one of our walks he encountered a dirt clod that resembles a bug). Now every night we when put him down, we have to sit on his bed and go through this routine:
"No rain, Mom."
"No rain, Booker. Listen."
pause
"Yeah, no rain."
"No "unner, Mom."
"No, no thunder, Booker. Listen."
pause
"Yeah, no 'unner."
"Mom, no bugs."
"No, no bugs, Booker."
"Scary bugs."
And sometimes there's a No Dirt routine as well.
Well, our walk today was somewhat enjoyable. Booker insisted on being held the entire time because he was scared of bugs and thunder. But he really enjoyed spotting and pointing out all the lizards that were scurrying about. It was also pretty muggy from the recent storm. In the winter, it will be a great little trail and hopefully by then Booker will be less of a wuss. 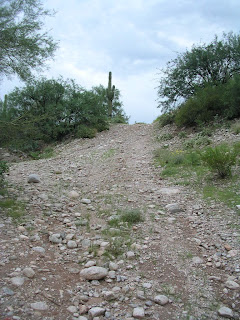 Here's the hill that failed to throw me into labor but gave me a terrible (and probably useless) contraction.
Posted by Margaret Proffitt at 9:33 PM

It's been fun reading your blog. We had so much fun with you guys last night! Thanks for coming over. Margaret--wanna do lunch this week?